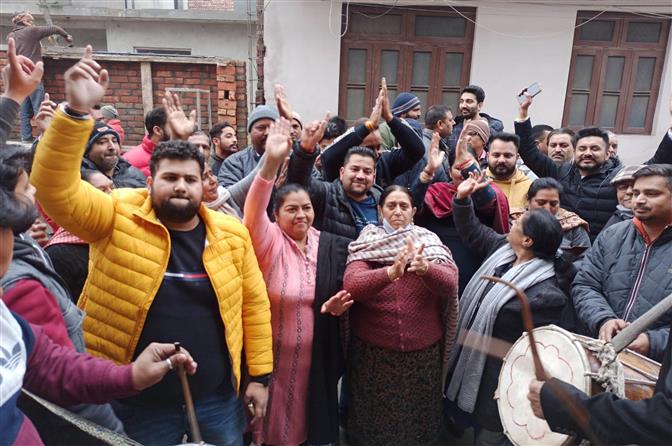 Cong workers celebrate after the annoucement of tickets for the Punjab Assembly poll in Jalandhar on Saturday. Malkiat Singh

The Congress list that came out this afternoon has heated up the political scenario. Of the 23 total Assembly seats in Doaba, tickets for as many as 20 have been announced in the first list itself. The tickets for three seats – Nakodar, Nawanshahr and Banga – have been left pending.

Of the total 20 candidates, the party chose to rely on 18 last-time contestants and has roped in only two fresh candidates this time – Amarpreet Singh Lally from Garhshankar and Sukhwinder Kotli from Adampur reserved seat.

A good orator of the party with a significant youth following, Lally is the Indian Youth Congress general secretary and has been chief of the Punjab Youth Congress. He was recently picked as the co-chairman of the Congress campaign committee. He had tried seeking ticket last time too, but remained unsuccessful.

As the Youth Congress leader, he is credited with having organised good shows and this time had a strong backing of party leaders, including Ambika Soni and Sunil Jakhar.

Lally has replaced Love Kumar Goldy, who lost twice from the seat in 2012 and 2017. Nimisha Mehta from the party, who has been very active for the last 10 years, is seeking ticket from here. There are reports that she would surely contest from Garhshankar, but from another platform.

With Kotli’s name figuring as the Congress candidate from Adampur, it has put an end to the speculation that Chief Minister Charanjit Singh Channi could contest from here. Kotli had contested from this Vidhan Sabha seat as a BSP candidate in 2012 and polled 25,263 votes.

Having remained the general secretary of the Punjab BSP, he quit the party two years ago. He was formally roped in by the Congress during CM Channi’s recent rally at Partappura village. With Kotli in the fray against strong Akali candidate Pawan Tinu, who has been winner during the last two terms, it would be a tough fight between the two ex-BSP leaders as Tinu too has been a former BSP candidate. Even though BSP is officially supporting SAD this time as alliance partner, but it remains to be seen as to whom the party cadre chooses.

Annoyed with the party not favouring them, some Congress leaders have decided to hold meetings with workers tomorrow (on Sunday) to decide their next course of action. Among them is former minister Mahinder S Kaypee. A close relative of Punjab CM Charanjit S Channi, he had been seeking claim from Jalandhar West seat from where sitting MLA Sushil Rinku has got the ticket. He had last time contested from Adampur, but lost it and showed no interest there this time. Phillaur-based leader and ex-minister Sarwan S Phillaur too will be holding a meeting with workers on Sunday after ticket was given to Vikramjit Chaudhary.

Tickets to 6 incumbent MLAs in Hoshiarpur

Party opts for Lally instead of Mehta in Garhshankar

Hoshiarpur: Political activities have intensified in Hoshiarpur after the Congress announced the names of candidates for all the seven Assembly segments in the district. The party has expressed confidence in its six incumbent MLAs out of seven and has fielded Amarpreet Singh Lally from Garhshankar. Sunder Sham Arora will contest from Hoshiarpur, Sangat Singh Giljian from Udmur, Dr Raj Kumar from Chabbewal, Pawan Kumar Adia from Shamchurasi, Arun Kumar Mikki Dogra from Dasuya and Indu Bala from Mukerian. Meanwhile, the opposition parties have expedited their efforts to rope in those leaders who have been denied tickets. It is pertinent to mention that the Congress did not face factionalism against the sitting MLAs in most of the seats, due to which the party has decided to rely on old faces. As far as Garhshankar segment was concerned, Congress faced defeat in the last two Assembly elections by giving ticket to Love Kumar Goldie, who’s considered close to Capt Amarinder Singh. Congress leader Nimisha Mehta was also a strong contender for the ticket this time. She had already intensified her activities in the constituency. After the ticket being given to Lally, it’s expected that there can be a strong reaction from Mehta. Now, it has to be seen what strategy Goldie adopts after being denied the Congress ticket. Similarly, in Mukerian segment, a faction of Congress leaders held a press conference and urged the high command to change the candidate (sitting MLA Bala). The Akali-BSP alliance and the Aam Aadmi Party have already announced their candidates for all the seats in the district who have been campaigning vigorously for the last month or so. — Sanjiv Kumar Bakshi

The Congress today remained undecided on finalising candidates for three seats of Doaba. The party could not finalise Banga ticket as Punjab CM Charanjit Channi’s Principal Secretary Hussan Lal was earlier being projected from here. Hussan Lal decided not to contest at the last minute. The party is mulling giving the ticket to ex-MP Chowdhary Santosh’s daughter Shamita Chowdhary or ex-MLA Tirlochan Soondh. In Nakodar, Jagbir Brar, who contested in 2017, quit the party to join the SAD and is candidate from Jalandhar Cantonment this time. Former minister Amarjeet Samra holds the say for the constituency and is likely to put forth the name of renowned orthopaedician Dr Navjot Dahiya from the seat.

Even as Congress ex-MLA Sukhpal Khaira is lodged in jail post his arrest by the Enforcement Directorate two months ago, the party on Saturday chose to announce his ticket. His campaign is being currently managed by his son Mehtab Khaira, who is hopeful of some relief on the next date of hearing on the matter on January 18.

Rana’s son fails to get ticket, party goes with Cheema

The race for ticket in the Congress from Sultanpur Lodhi between sitting MLA Navtej Cheema and minister Rana Gurjeet Singh’s son Rana Inder Partap Singh ended today with the former grabbing it. Rana Inder Partap Singh had been aggressively campaigning in the holy city for the past over three months. During this period, PPCC chief Navjot Sidhu had visited the city and held rallies in favour of Cheema. Infuriated, Rana Gurjeet Singh had even given media bytes expressing his dislike for Sidhu’s functioning in the party. Both minister as well as his son did not take the calls, but they are learnt to have been telling local residents that they would be sharing their next move in two days or so.

Three Congress leaders from Doaba, who were unhappy over the list today, are likely to quit the party to join the BJP. With little time left and facing shortage of faces, the saffron party is likely to field these leaders from rural or semi-rural seats of the region.