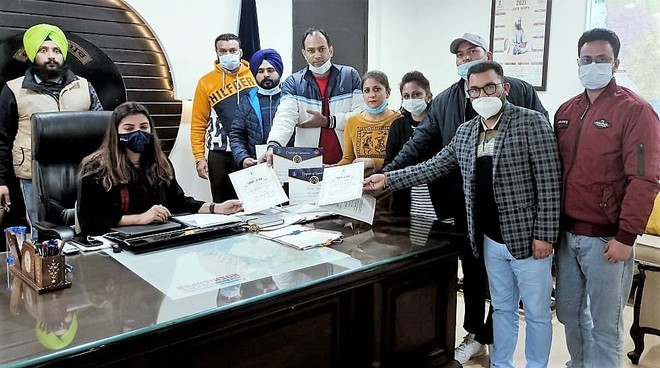 Continuing the ongoing indefinite strike, the health workers working under National Health Mission in the Health Department, on Friday returned the commendation certificates given to them for providing best services during the Covid pandemic as ‘Corona Warriors’ to the Deputy Commissioner, Hoshiarpur. On the occasion, district vice president of the NHM Emplyees Union, Sumit Sharma, said the strike was being carried out by the employees working under the National Health Mission for their rights and would continue till their demands are met. “These health workers have been performing their duties diligently for the past 15 years on meagre salaries and are constantly exploited by every government. All the announcements made by the Channi government are pure lies and our legitimate demands were not being heeded which is a great betrayal of the employees,” he said.

He said in the Covid pandemic, these employees did risk their lives to serve the humanity and now but the government completely ignored the legitimate demands of the workers, which forced the Corona warriors to return their letters/certificates of commendation to the government today in protest. Meanwhile, Azad Kisan Sanghrsh Samiti Lachowal also extended their support to the NHM Union. All workers raised anti-government slogans and said that if their demands were not met, the struggle would be intensified.