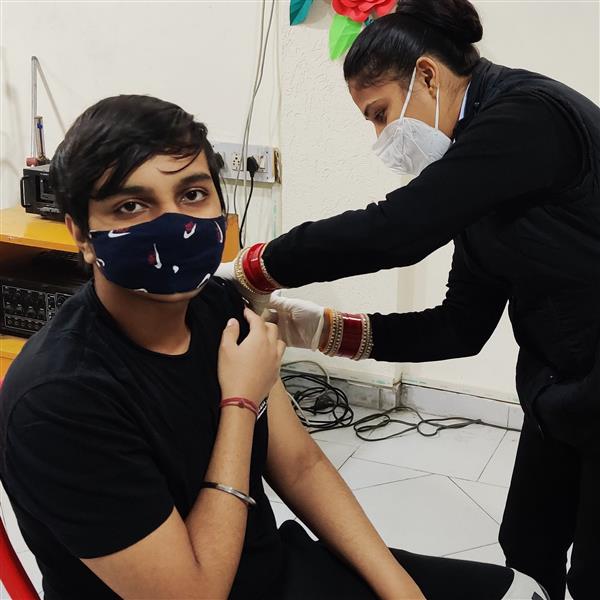 Jalandhar: Disha, an initiative under the guidelines of Bowry Memorial Educational and Medical Trust, organised Covid-19 vaccination camp at Innocent Hearts. It was conducted in collaboration with the Civil Hospital. It was meant for school students aged between 15 to 18 years (students of Classes X to XII). The consent form was sent to the students by the school. After receiving their consent, the students were vaccinated. On this occasion, children were accompanied with their parents. Dr Nupur Sood, MD, Paediatrics, made the parents of the children aware of Covid-19 and said the vaccination of this age group was mandatory.

To commemorate the birth anniversary of Swami Vivekananda, the NSS wing of the PCM SD College for Women celebrated National Youth Day. A declamation and poster making competition were organised on this occasion. The theme of the event was ‘Teachings of Swami Vivekananda’. The purpose of this event was to make the students aware about the life and teachings of Swami Vivekananda. The students participated in this competition with great enthusiasm. The members of the managing committee and the Principal, Dr Pooja Prashar, praised the participants. The Principal also appreciated the efforts of Dr Neelam Gupta, Sunita Bhalla and Dilpreet Kaur for organising this event.

Kanya Maha Vidyalaya (KMV) students made the college proud by securing the second position in various competitions organised during the mathematical artistry programme. In this online inter-college competition, organised by Department of Mathematics, Khalsa College for Women, Ludhiana-based on the life and successes of famous mathematician Srinivasa Ramanujan, KMV students named Anjali and Kiranjot secured second position in rangoli-making competition. Along with this, Vajinder Kaur stood second in the poem composing competition in Punjabi language category. Principal Dr Atima Sharma Dwivedi averred that participating in such competitions instil confidence in the students and at the same time also provides them with a great platform to hone and handle their talents according to the competitions.

NCC cadets of Hans Raj Mahila Maha Vidyalaya commemorated national youth leader Swami Vivekananda, a symbol of courage, energy and enthusiasm under the aegis of 2PB (G) BN NCC, Jalandhar, on his birth anniversary. NCC cadets paid homage to Swami Vivekananda by cleaning his statue at HMV Chowk, Jalandhar. Principal Dr Ajay Sareen said Swami Vivekananda was a great visionary whose thoughts have always inspired the youth of motion. He has motivated many youngsters to work towards motion building. CO Col NPS Toor appreciated the efforts of cadets and encouraged them to follow the footsteps of this great leader. ANO Lt Sonia Mahindru said we all should work collectively to fulfil his dreams.

Ivy World School, under the aegis of the Vasal Educational Society, organised the Lohri celebration. The virtual celebration began with a reminder of the festival’s significance. Students were taught about how Lohri is celebrated, what we wear, and the seasonal foods to consume. Little Ivyians dressed up in traditional Punjabi garb and demonstrated their favourite Lohri dishes such as jaggery, rewari, sesame, popcorn, and groundnuts. The kids and the instructors virtually celebrated the festival by participating in art and craft activities such as creating a campfire out of paint and ice-cream sticks and creating a Sundar Mundariye scenario on a plate depicting a beautiful and imaginative Lohri environment.

A webinar was conducted on National Youth Day at MLU DAV College Phagwara under the guidance of Dr Kiranjeet Randhwa, Principal of the college. During a webinar, which was conducted by physical education department, students gave speeches on the life of Swami Vivekananda. The students were advised to replace weak thoughts with optimism with the help of yoga and meditation. Dr Randhawa addressed the students that youth have the potential, zest and energy to uplift the country from degeneration. She said a country’s future is lying in the hands of youth, so it is important to motivate the young generation to strive for excellence. This day is celebrated to spread awareness about how the youth should be encouraged and guided so that they can contribute to the country’s development. She further said Swami Vivekananda’s life and teachings have encouraged millions across the world.

National Youth Day was also observed in Shiv Jyoti Public School. Students of Classes 6th to 9th were made to write slogans on the philosophies and ideals of Swami Vivekanand and were made aware about this day through the medium of video presentation. Students Hisha-(8th-D) and Bhawni (9-C) and co-associate teachers Sapna, Palwinder Kaur and Ranju Sharma participated in the activity with full enthusiasm. An e-pledge titled ‘Say yes to life and no to drugs’- an initiative of the Indian government was taken by students, teachers and parents. Principal Neeru Nayyar apprised the students to believe in the teachings and philosophies of Swami Vivekanand.