Unlike others, Basti Sheikh Dasehra Club celebrated the festival with fervour 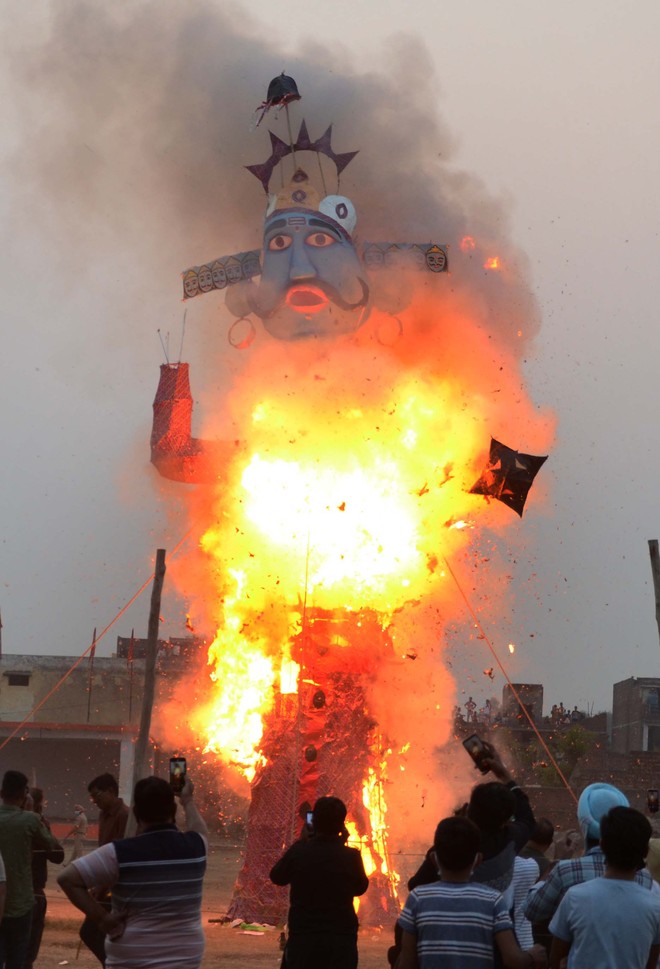 The effigy of Ravana goes up in flames in Jalandhar. tribune photo

The Dasehra festivities remained a low-key affair as unlike every year only Ravana effigy was installed and put to flames in the city on Sunday. Obviously, owing to the spread of the virus, Meghnada and Kumbhkarana effigies were not installed by most committees this year.

Days before the festival, the Mahkali Committee had sent a message, “As per the instructions imposed by the district administration, the Shri Mahakali Mandir Dasehra Committee is not celebrating the festival by burning the effigies of Ravana, Kumbhkarana and Meghnada.”

The city, which organises the Dasehra festivities at around 20 places, witnessed only a couple of Dasehra celebrations this year due to the Covid-19 pandemic.

However, the Dasehra Club, Basti Sheikh, celebrated the festival with fervour. A majority of other committees observed a low-key festival with some burning little Ravana effigies and others just marking the day with pooja. A 40-foot tall Ravana effigy was burnt at Ghaas Mandi, Model House, to mark the festival. The lone Ravana effigy was not accompanied by Meghnada and Kumbhkarana effigies Though only 200 people were permitted to enter the Dasehra grounds by the administration, thousands flooded the spot to enjoy the festivities.

The Shri Mahakali Mandir Committee burnt only a 6-foot tall Ravana effigy with no effigies of Meghnada and Kumbhkarana being installed. The event was attended by 50 to 60 people with no outsiders invited except committee members.

Tarsem Kapur, Life President, Shri Mahakali Mandir Committee, “Huge rallies in Bihar are being held, farmers converge in huge numbers. It seems only Dasehra celebrations can lead to the spread of the virus. Over 50,000 people converged on the place to watch the event each year. This year the administration had asked us to limit gatherings to 200. Since that was not possible, we did not hold a formal ceremony this year.”

Kapur said it was a lusterless Dashera for artisans, effigy makers, cracker sellers, event organisers and vendors who converged around the Dasehra venues.

“It’s a huge loss for cracker sellers in Amritsar. They sell the best firecrackers for Ravana effigies. Sucha Singh from Amritsar sells these. But this year no one had ordered firecrackers due to the Covid protocols.”

Pradeep Kumar, secretary, Dasehra Club, Basti Sheikh, said, “We did not build Meghnada and Kumbhkarana effigies to celebrate a muted Dasehra as per the guidelines. We had closed gates of the area at 4 pm.”

“Many slipped in despite our best efforts. Better arrangements by the administration would have helped in preventing crowds congregating on the venue,” he added.