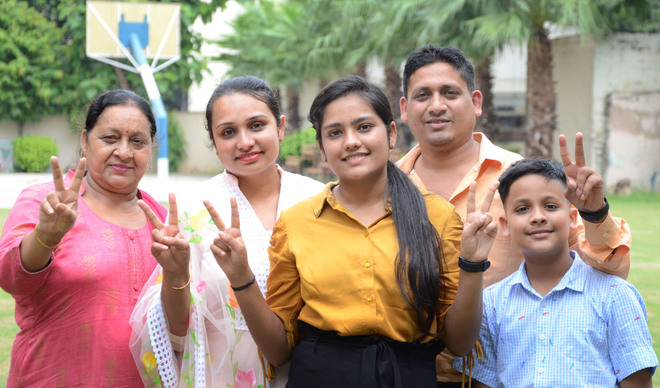 Mehak Gupta (99.6%) of Innocent Hearts School, who topped in the city, along with her family in Jalandhar.

A regret of not being able to appear for Class X board exams vanished from minds of students, especially the toppers, after the Central Board of Secondary Education (CBSE) declared results on Tuesday. Most students said they could have achieved just that much of what they actually got through a formula devised by the CBSE for evaluation.

The top slot from the city went to Innocent Hearts School’s student Mehak Gupta who obtained 99.6 per cent. She was followed by two students of Police DAV Public School – Mansi Aggarwal and Saniya Arora – both obtaining 99.4 per cent.

Mehak Gupta said she had been nurturing this dream for the last two years. “Every year after seeing photos of toppers in newspapers, I used to tell myself that my picture should also be on the top of all newspapers. Today, I have fulfilled my dream and I am getting calls from all media houses,” she beamed.

Mehak scored cent per cent in maths, science and Punjabi, and 99 in English and social studies. Aiming to become a chartered accountant, Mehak has already taken commerce stream.

“I have always been consistent. I had scored 97 per cent in Class VIII and 96 per cent in Class IX. I also maintained a fixed routine when Covid made us stay indoors. I used to attend online classes for three hours and after that I devoted my full day for studies, relaxing only for two hours, which included mealtime,” said Mehak.

Mehak attributes her success to her father Vikas Gupta, an industrialist, and mother Cherry Aggarwal, housewife, and her schoolteachers.

While Mansi has taken medical stream and wants to be a doctor, Saniya has joined non-medical and wants to be a civil engineer like her dad. Mansi has got cent per cent marks in maths and social studies and 99 in English, Punjabi and science. “My dad Karandeep Aggarwal is a pharmacist and my cousin with whom I am closely attached is BDS. They both are from medical background and I felt inclined for the same stream,” said Mansi and added that she was very upset at the board exams getting cancelled as she had prepared very well. Today I felt that I could have obtained just around similar marks had I appeared for exams, she said.

Scoring the same marks, Saniya also has a similar opinion on being able to take her examination. She said, “Had I not been regular with my studies in Class X and not been serious about my pre-board exams, I could have scored less. The consistency that I maintained in Class IX and continued even sitting at home during the pandemic has ultimately paid.”

Saniya has got 100 marks in social studies, science and mathematics. She has 98 in English, 99 in Punjabi and 96 in Hindi. She credits her schoolteachers, her father Suresh Kumar Arora, a civil engineer, and her mother who is a teacher at Government School, Mithapur. “My younger sister who is in Class VII also had a major role to play as she ensured that I was relaxed even in some tense moments. She helped me kill my boredom,” said Saniya.

Japjee credited her school principal Rashmi Vij for mentoring her and other students from time to time. She scored 99 marks in English, maths, social studies and Punjabi and cent per cent in science. Aiming to be a doctor, she has taken medical stream. “I have set a target of providing free treatment to five poor patients daily once I start practising.” Her father Tajinder Singh is working in the Indian Railways and her mother Swaranjeet Kaur is a government schoolteacher posted at Kishanpura.