Authorities record low response on Day 3 | Only 25 healthcare workers turn up for the jab, while the list entailed 100 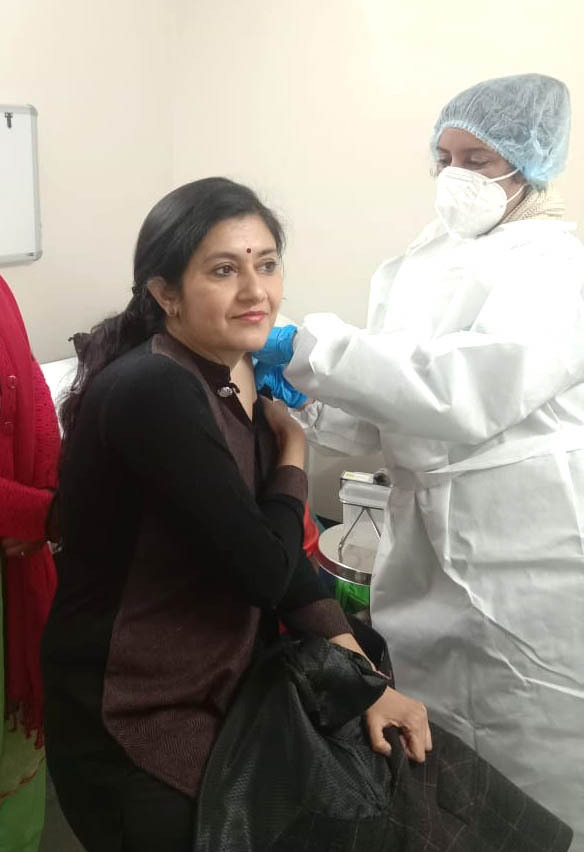 When asked about the reason, Dr Bala said it was entirely a personal choice and there was no pressure from the Health Department or the government. She said that promotional videos were also being made and circulated to encourage the staff.

As per the information, there is a problem with software too. Dr Bala said some people do come voluntarily for vaccination, but the names of the workers who have refused should get omitted from the list.

“Those who refused on Day 1, their names we were still appearing. Whereas, other healthcare workers are coming but since their names are not enlisted, they cannot be inoculated,” she said.

The Punjab Institute of Medical Sciences (PIMS) joined the India’s Covid vaccination drive under the supervision of district health officials on Tuesday.

Dr Tanya Moudgil was the first person to get vaccinated along with Dr Kulbir Kaur, director principal, PIMS, and other doctors of the hospital. On the inaugural occasion, resident director Amit Singh and Civil Surgeon Dr Balwant Singh were also present to encourage the health workers. Nearly 70 health workers were vaccinated at the PIMS on Tuesday.

Dr Kulbir Kaur said after a long wait, the vaccination for Covid-19 has finally arrived and doctors and staff of the PIMS would be the first to take the dose of Covishield. People are in a state of dilemma regarding the vaccine, but by getting vaccinated themselves, the PIMS doctors have sent out a message that the vaccine was safe. She said PIMS also want to spread awareness about health and safety protocols about anti-Covid vaccination programme. Amit Singh, resident director of the PIMS, said: “Beneficiaries will be closely monitored after the vaccination and our staff will be in touch with them to know about their experience. Elaborate system has been put in place to deal with any adverse effects of immunisation.”

Meanwhile, an orientation ceremony was held for the first year MBBS students. On this occasion, Dr Kulbir Kaur, director principal, and Amit Singh, resident director, addressed students and wished them a bright and prosperous future. Dr Kulbir Kaur said: “Students will get a very friendly environment to study at PIMS, as the faculty members are very helpful and always available for students.” She said PIMS had strict rules for ragging as anti-ragging committee had been formed to deal with any issues faced by new students.

Dr Rajiv Arora, vice-principal, and other faculty members were also present at the orientation ceremony.

Hoshiarpur: With five new positive patients traced in Hoshiarpur district, the total number of positive patients has risen to 7,950. The number of deaths remained 328 as no death was reported on Tuesday. Civil Surgeon Dr Ranjit Singh informed that with the receipt of 1,286 new samples of people with suspected flu-like symptoms the total number taken in the district till date has reached 2,64, 922. According to the reports received from the lab, 2,56, 260 samples are negative while 2,363 are awaiting results and 184 are invalid. The number of active cases is 45, while the number of patients who have recovered is 7,577. Out of 5 patients who tested positive today, three are from Hoshiarpur, while two hail from other health blocks of the district. OC