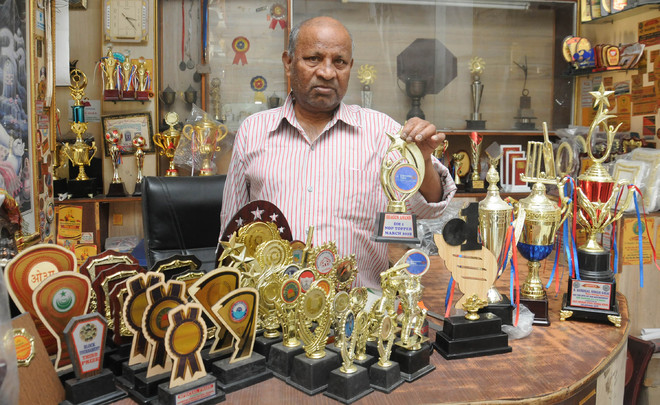 Nearly 25 shopkeepers around Jhandian Wala Peer Chowk have faced extremely hard days. With schools and colleges having remained shut for almost seven months now and no social events or tournaments happening, these shopkeepers engaged in selling trophies, cups, plaques, shields and medals are reeling under the effects of the outbreak.

The shop was shut for nearly two months during the lockdown and now it is all about maintaining a routine as no takers are available. The owners of the nearly 30-year-old market say they are confronted with worst time of their lives. These were the days when all institutes used to organise their annual functions, prize distribution events and sports tournaments and there was not enough time to pack up all the ordered articles to be sent to various locations all around Doaba.

Rajiv Sachdeva, owner of Bhagwati Trophy Planet, says, “Every morning we come here, open the shop and get all the pieces wiped hoping that customers will increase. The scarce numbers in the last five months have been bankers or some officials of the government departments who were to gift the plaques to their retiring staff or to honour some dignitary. We are not expecting any spurt in our business till March. Since we dealt exclusively in trophy selling, the entire year was totally wasteful for us financially.” He showed a variety of souvenirs available in wood, metal pieces, glass and plastic too.

All those who had other side businesses to ensure that they had supplementary income coming their way have been better off. Arjun, owner of Sharda Sports, is one of them. “Thankfully, we also had business of selling sports jerseys. We have had players and youth coming all through the summers for buying sportswear including t-shirts and shorts,” he revealed.