Cyclists fume as traffic police tell them to stay off highways : The Tribune India

Say there is no infrastructure for cycling in city 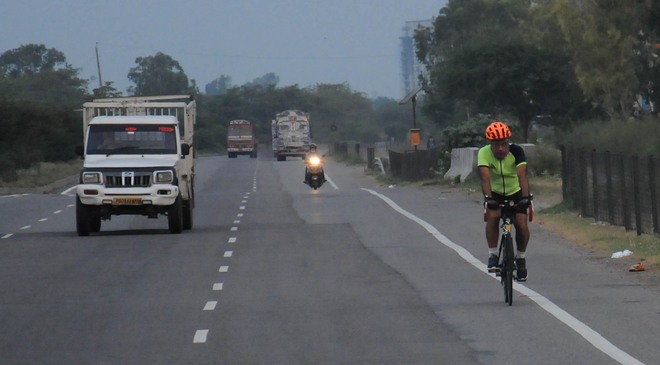 ACP (Traffic) Harwinder Singh says no written order to stop cyclists has been issued, but the cops on duty have been asked to advise the cyclists not to use highways to avoid mishaps.

As the district traffic police wing stopped city-based riders from cycling on highways and roads with heavy traffic, after the death of a cyclist in Patiala, cyclists here have expressed their resentment against the police and considered the move ‘meaningless’.

A day after the cyclists in the city were stopped at various roads, the cycling activities remained suspended on Sunday, even though the residents felt that morning hours on Sundays were the best for cycling. While the traffic police claimed that they just advised the cyclists from avoiding highway lanes, cyclists are of the opinion that in the absence of any cycling track in the city, they have to rely on highways for smooth cycling.

Rohit Sharma, President, Hawk Riders Association, Jalandhar, said, “The city lacks the infrastructure for cycling. We have nothing but just these dilapidated roads in the name of infrastructure. Cycling on these roads is a bumpy experience. There are no designated lanes to promote cycling. Traffic officials have told us to move to grounds, but in most of the grounds, entry for visitors has been banned owing to Covid-19 outbreak. I have been cycling for the past several years and my every day target is to cover a distance of 60-70 km which is not possible on city roads. Hence, we appeal to the officials to not only remove the 8 am-8 pm restriction, but also ask cops not to stop us from cycling on highways.”

Similarly, Dinesh Handa (54), a resident of Mahiran Gate, who is not only a cyclists but also runs his own professional cycling centre, rued his fellow cyclists were harassed at Jalandhar cantt and the PAP on Friday. “Firstly, we were denied entry in cantt as the force manning the entry gates said they had been ordered not to allow cyclists from entering the cantt to prevent the Covid spread. Next, when we tried to cross the PAP Chowk, the police on the checkposts stated the same. When we asked to show them the written orders, they remained mum and asked us to return.”

Meanwhile, ACP Traffic, Harwinder Singh said, “We haven’t issued any written order to stop cyclists but the cops on duty have been asked to only advise the cyclists not to use highways to avoid mishaps. Moreover, children below 18 years of age also cycle carelessly, which could lead to unfortunate incidents. Hence, we appealed them to take all the precautions before cycling on highways.”