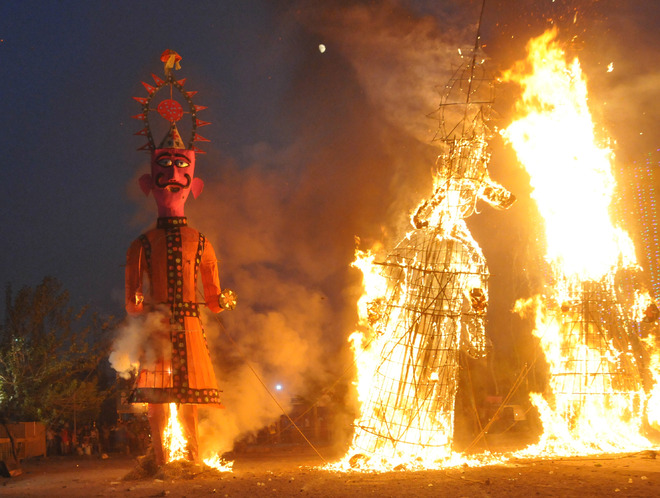 People watch the effigy of Ravana go up in flames during the Dasehra celebrations in Jalandhar on Friday. Tribune Photos: Malkiat Singh

With Covid restrictions in place like last year, Dasehra was celebrated at six prominent places in the district even as many Dasehra committees also held restricted celebrations in view of the Covid protocols.

The effigies of Ravana accidentally caught fire ahead of the actual plan to set these alight at least at two locations in the city. At Dhan Mohalla, even before the dignitaries present could press the remote, Ravana effigy caught fire from the adjoining effigy of Meghnath and got burnt. Likewise, at another site of the market place on Ladowali Road, it was perhaps the pressing of a wrong button that led to the burning of Ravana effigy ahead of those of Meghnath and Kumbhkaran.

One of the biggest celebrations in the disrict was at Adarsh Nagar Market, organised by the Upkar Dasehra Committee, which has been organising the festival for the last 41 years. Sixty-foot-tall effigies of Ravana and 55-foot-tall ones of Meghnada and Kumbhkarna were erected at the ground. It is estimated that about one lakh people turned up for the event.

Congress MLA, Rajinder Beri, who is also among the organisers of the committee, was also present on the occasion. While MLA Pargat Singh was also invited to the event, he could not make it due to the unprecedented crowds who turned up at the event.

Ramesh Sharma, former district president of the BJP and deputy chief organiser of the committee, said, “There was much fervour among the public to attend the event. For the past 41 years, we have been celebrating Dasehra cutting across party lines and with bonhomie. About 1 lakh people gathered for the event. On the occasion, we also exhorted people repeatedly to get themselves vaccinated for Covid-19.”

A huge event was held at the PUDA grounds by the Shri Ram Utsav Dussehra Committee in Jalandhar where 60-foot-tall effigies of Ravana, Meghanada and Kumbhkaran were set on fire at sunset this evening.

Dasehra or Vaijay Dashami culminated with the effigies of Ravana, Meghanada and Kumbhkarna being set to fire to symbolise the victory of truth over evil.

Various shobha yatras were taken out on the occasion of Vijay Dashami this monring which saw the presence of leaders and people dressed in colourful religious attire. At the Shobha yatra of the Upkaar Dussehra Committee this morning, BJP leader Manoranjan Kalia, Amit Taneja and Raghav Mahajan, among others, were present.

Subdued celebrations at some places

Kapoor said, “The district administration asked us to restrict our gathering and sought an affidavit from us stating that the event would not cause Covid. Lakhs of people turn up at our celebrations, so we were unable to furnish such a document. Therefore we only burnt symbolic five to seven feet effigies.” The other major celebrations which could not take place due to Covid-19 were those at the Burlton Park and Government Training College, Ladowali Road.