Another guard, also a former jawan, from nearby village had died preventing a robbery 20 yrs ago 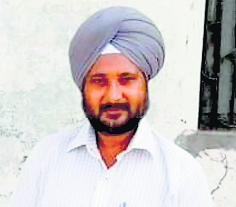 Surinder served in the Army as a jawan for 35 years.

Hundreds of people attended the last rites of the braveheart, a word fitting well with Surinder Singh, the guard at the UCO Bank, who lost his life on Thursday while fighting the robbers who shot him dead. A father, an animal and fitness lover, a farmer and a deeply pious man of the village was on Friday remembered dearly by all the villagers as they poured in condolences and regards during the cremation of the army man.

Neighbours believed that being an Army man at heart, he had paid price for the incident — Surinder served in the Army as a jawan for 35 years. Manohar Singh, next door neighbour of Surinder, at the Darli Kalan village, has something intriguing to share. He refers to an incident that happened 20 years ago — when another ex-serviceman had lost his life defending a bank robbery in a nearby village. Fauji si tan fass gaya…20 saal pehlan vi fauji fasseya si (since he was an army man, that’s why he didn’t give it a second thought…same thing happened 20 years ago). He goes on: Dono pakke sii, asi mare tan mare prr paise nahi jaan dene… (both were men of steel, thinking that they may die but would not let the robbers flee with the money).

Manohar and compatriots had never seen Surinder idling away hours. “Surinder Singh was 50 and always engaged in something,” he shares of his effervescence. The villagers had been seeing Surinder get up early daily and meeting them during his morning walk, something which he never skipped.

Manohar had met him at the local gurudwara on the day of the incident. How could he have known it was the last time he would be seeing him. “He was a farmer, ardent and passionate cattle lover. He never would waste time. He tended to the cattle, worked in fields, met people. Always did his ‘ardaas’ in the local gurudwara morning and evening. I had never thought that it would be the last time I will meet him. It is a big loss for the village,” he says.

About time and family

Surinder Singh is survived by his sons, aged 21 and 19, who study in local establishments, his elderly parents, wife, and his brothers’ family. They all dwell together in the same house. This is a family of nine persons to be precise – all of whom were inconsolable as his last rights were being performed.

The family was due to shift to the US to his sister who already stays there. All paper work was done and visas secured. The visit was on horizon but the pandemic dashed all their plans. And fate rewrote a wailing turn of events.

After serving in the Army, Surinder was with a local college for few years and had been working as the guard at the bank for past eight to ten years. Manohar makes up for the rest. “He was 50 but looked much younger. Met everyone cheerfully and was a brilliant father. It is his bravery that has made us lose him. True to his spirit, he was never one to give up. We are proud of him.”