Stayed away from family for months, they have been testing over 100 patients a day 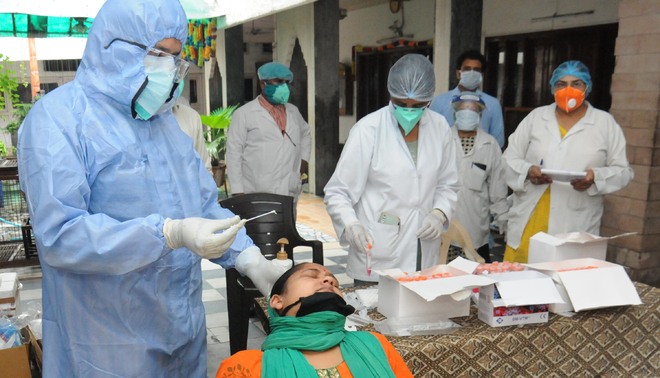 In the past four months, a single doctor on Covid testing has slid the nasopharyngeal swab (the 6-inch-long stick used for Covid tests) into the throats and noses of 5,000 people, while others have been pushed away by peeved toddlers and 3 to 4-year-olds to 70-year-old people, unwilling to allow the intrusion.

Scurrying streets, alleys, hotels, deras, residential colonies and slums for the past four months, these doctors, assisted by a team of lab technicians and nurses, have been scrambling across high-risk and containment zones.

Some of them have elderly parents who they haven’t hugged for months and other have little children, who have to await their parents’ customary shower and gargle (a mandatory daily ritual in Covid times) to hang out with them each day. While five of the dental doctors have been on the job from the day testing took off in the district, as many as six to seven teams have been carrying out sampling since April.

Recently, seven to eight more ENT and other dental specialists were also included in the team. Barring doctors, a team of lab technicians, nurses, para-medical staff also accompany the mobile and CHC-based testing teams for conducting sampling. In all, about 40 to 45 doctors carry out sampling in Jalandhar.

Dr Manpreet Ghumman hasn’t hugged his 71-year-old grandmother for months and lives in his own house like a recluse. Having trained over 30 doctors in the district himself, he has conducted testing of 5,000 to 6,000 people so far – sometimes over 100 a day.

He says: “The heat is certainly a factor which made testing in PPEs challenging at first. But now, we are used to it. My 71-year-old grandmother looks at me questioningly saying nothing will happen to me. But I still stay away and restrict myself to my room.”

He said doctors also have to play counsellors to reluctant patients, “There have been kids who cry, push us away and raise hell over testing. They fear it more than a vaccine. But we have to convince them. Sole elders too! Coaxing and persuading patients is a big part of testing process. But we have not let anyone go without a test ever.”

Dr Jatinder Kaur, Medical Officer, Dental, who has conducted sampling of over 1,400 to 1,500 people so far, faced similar challenges. She says: “One afternoon, a 70-year-old pushed away the swab stick and declared that he didn’t want the test. There are women, who refuse to get tested because they don’t like the stick to be pushed into their mouth. We have to sit there and convince them. Many people nudge us aside or push swabs away, prompting a long wait.”

Dr Kaur said: “There have been times, when I tested 100 people in a single day, but I never felt tired or drained, at least while on job. While Dr Kaur lives with her 70-year-old mother, she doesn’t enter the house until she takes off her shoes and dupatta etc, outside and doesn’t come in contact with anyone at home until she has first taken a bath, washed her hands with disinfectant/soap and gargled thoroughly.

Dr Deepak Kajla who has tested at least 2,000 people so far, also says there was no question of contact until he sanitises himself first. Dr Deepak says: “I have myself been tested once and some of our lab technicians and staff too! We have tested NRIs, residents and a countless other people. The most important part is taking the right precautions and protecting both — your patients and yourself. During sampling, sometimes the mucosa of some people is inflamed. Others don’t like the idea of swab tests. But when you get the hang of it, it’s a simple procedure.”