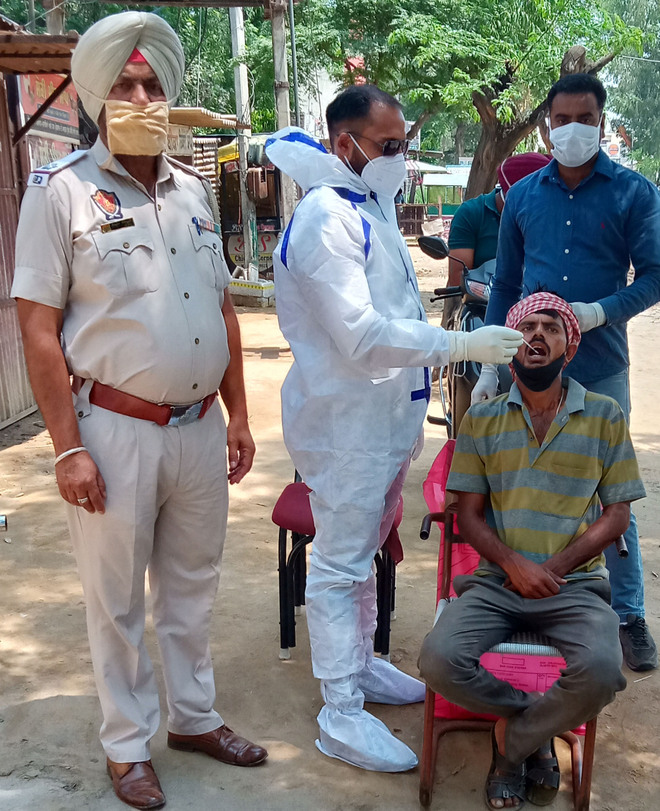 A person undergoes RT-PCR test for not wearing mask in Nawanshahr.

Despite the rising incidents of patients dying due to lack of oxygen, people seem to be learning no lesson as a majority of them can be seen moving without wearing a mask and violating other protocols.

Though the police are issuing challans and filing FIRs against the offenders, these have failed to instill a fear of the law in them. They are serious neither about their own lives nor those of others. As many as 919 people had to undergo RT-PCR tests and these were being conducted by the Health Department at the nakas set up by them.

The administration and the Health Department find it strange that people are still not taking the virus seriously. At Gunachaur village, three persons were booked for opening their liquor vends.

At Jadla, a case was registered against one person for opening his meat shop and not following the orders during the curfew and the lockdown on Saturday and Sunday.

A case was registered under Sections 188 (disobedience to order duly promulgated by public servant), 269 (whoever unlawfully or negligently does any act which is likely to spread the infection of any disease dangerous to life) and 270 of the IPC and Section 52 of the Disaster Management Act and Section 3 of the Epidemic Act.

Jalandhar: The cops at Basti Bawa Khel police station on Sunday arrested two men for violating lockdown norms. While one was the owner of a dhaba, the other was owner of a private swimming pool.

SHO Gagandeep Singh said that a police team during patrolling spotted the accused flouting Covid guidelines. While the dhaba owner, Harish, had kept his dhaba open, Inderjit Chauhan also kept his swimming pool open. Both were held under Section 188 of the IPC, but later released on bail.

“Weekend lockdown has been imposed in the state due to increasing cases of Covid-19. In order to contain the spread, instructions have been given to close all shops in the city during curfew. Only emergency services can operate during lockdown period. Under this, raids are being conducted to avoid any violation. Orders have been issued to take strict action against those flouting Covid protocol”, added the SHO.