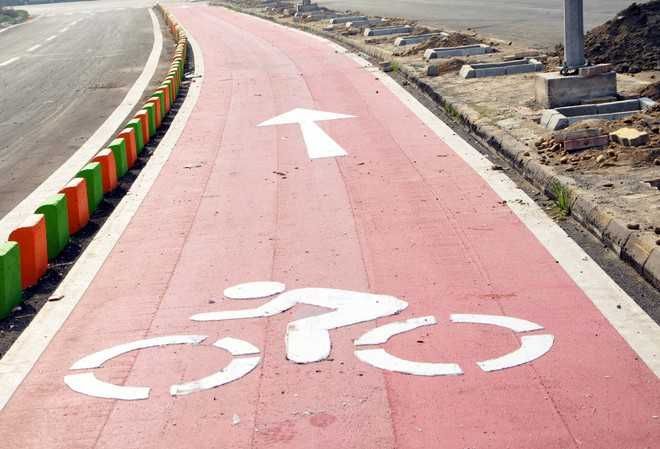 Deliberations have begun between the Smart City officials and the Jalandhar traffic police on setting up a 52-km cycle track within the city to boost a growing number of health-conscious residents who have taken to cycling in the ongoing pandemic.

A meeting in this regard was held between Smart City CEO Karnesh Sharma and DCP Jalandhar Arun Saini and their teams. It has been decided that the civil and police administration teams will soon take out a joint tour to finalise the 26-km stretch of road on which the track would be set up. Covering both sides of this road, a track of 52-km would be finalised.

The route plan for the track would be finalised in a week’s time, said Sharma, adding that the cycling time from 6 am to 8 am will be allotted to the riders. “A separate track will make cycling accident-free and give them an all new experience”, he said. During a joint route plan finalising exercise, the officials will also earmark sites from where encroachments need to be removed and roads need to be widened.

The roads which are already wide and are likely to be included in the plan include 66-feet road, 120-feet road, Skylark Chowk to Model Town and Surya Enclave locality roads. As of now there are no cycling tracks even in areas like Focal Point, Industrial Area and Gadiapur, where labourers move in large numbers for work in factories every morning and evenings.

There also are plans to have rental cycle system wherein users will be able to take cycles on rent from places like bus stand towards Rainak Bazaar, Sabzi Mandi and other areas, the officials said.

Jalandhar: 'Mera Sheher Jalandhar, Mere Dil De Andar' swach Jalandhar anthem was released on the completion of month-long campaign 'My waste my responsibility' on Thursday. A cycle rally was organised on the occasion and the officials of the Municipal Corporation also attended the same. Several competitions such as declamation contest, singing competition were held. In the month-long campaign, city residents were asked to separate dry and wet waste and then give it to the safai karamcharis. Under the campaign, residents were asked to manage the waste to make city clean and beautiful. TNS