Demands not met, Jalandhar sanitation workers stay away from work : The Tribune India 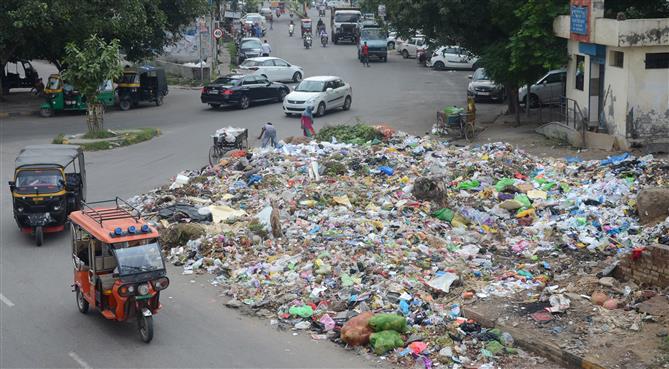 Heaps of garbage pile up.

Santitation workers held huge protests in the city today over the non-fulfillment of their long-pending demand of recruitment of permanent sanitation workers in the city. The union did not lift garbage today in protest against the Municipal Corporation for not recruiting permanent staff members.

Committee to look into regularisation

A committee will be formed, and it will look into how the (permanent) recruitment will be made and the amount of funds required. — Devinder Singh, MC commissioner

The protestors held a sit-in till 12 noon. MC Commissioner Devinder Singh then assured the union members that he would ensure that their demands are met. “A committee will be formed, and it will look into how the recruitment will be made and the amount of funds required,” he shared. Reportedly, the whole process would cost an amount of Rs 60 crore.

Meanwhile, the problems of the Municipal Corporation further compounded as residents of Model Town continued with their protest over the dump site. ragpickers complained that the residents have not been letting them throw garbage on the site. Area Councillor Balraj Thakur sided with the residents and warned that he would not let anybody throw trash in the area.

This did not go down well with the rag-pickers, as they then took up the matter with former safai karmchari leader Chandan Grewal, who then pressed Thakur on the issue. Thakur said he would have to meet the commissioner to look for another site for dumping the garbage.

Grewal and a group of rag-pickers reached the MC premises and raised slogans against the authorities. MC Commissioner assured him that the issue w\ould be deliberated over and resolved soon.