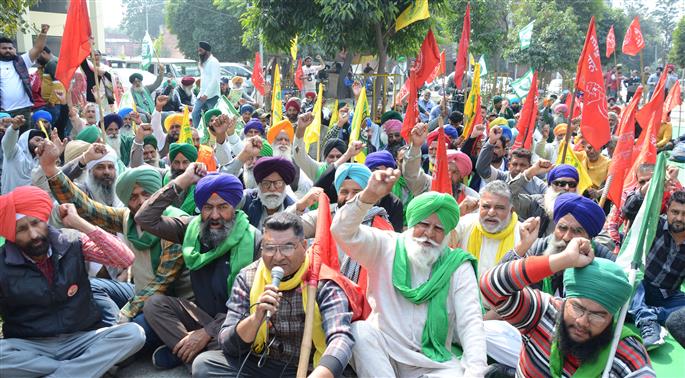 Farmers hold a protest over the Bhakra Beas Management Board issue in front of the DC office in Jalandhar on Monday. Sarabjit Singh

On the call given by the Sanyukt Kisan Morcha and 26 farmers’ organisations from across Punjab, members of the Bharatiya Kisan Union (Rajewal) organised a dharna in front of the District Administrative Complex here on Monday.

The union leaders held a demonstration and presented a memorandum to the Deputy Commissioner against the Centre’s move to allegedly tweak the rules for appointment of the members of the Bhakra Beas Management Board. Kashmir Singh Jandiala, spokesperson for BKU (Rajewal), and district president Mandeep Singh Samra led the protest which continued for over three hours.

The farmers alleged that by changing the rules, the BBMB had robbed Punjab of its due rights. The chairman of the board and a permanent member must be from Punjab, they demanded. They also raised the issue of non-implementation of their other demands, which had been accepted by the Centre during the Kisan Morcha in Delhi.

The activists said their issues, including legislative support for the MSP and withdrawal of criminal cases registered against the activists who had been demanding punishment for the perpetrators of the Lakhimpur Kheri killings had still been lying unfulfilled.