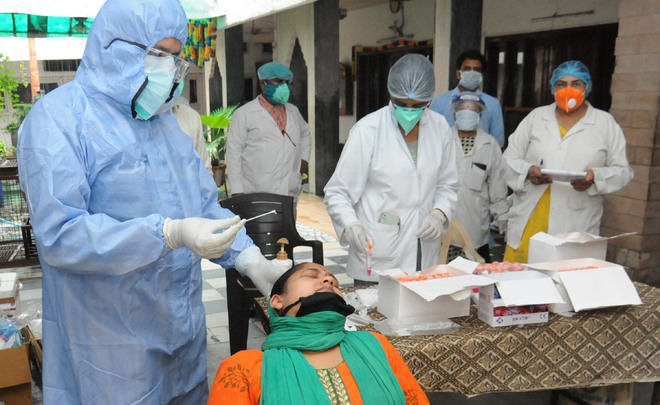 Health team collects the swab of a patient in Jalandhar. Tribune Photo

The District Administrative Complex has already been under the scanner with the DC already issuing orders restricting the number of visitors to the office after the last spike in the number of Covid-19 cases in Jalandhar. 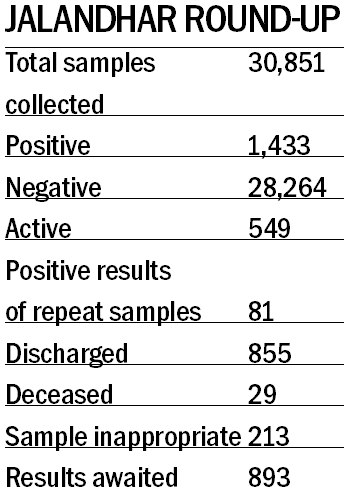 Of the 92 fresh cases, 49 are contacts of previous positive cases and 43 are new cases. A number of cases were reported from Kartarpur and others from Randhawa Masandan, Shahkot and other areas.

Among the new patients are two policemen and a person who returned from abroad.

Civil Surgeon Dr Jasvir Singh said 31-year-old woman of Seehwan village and a 32-year-old NRI of the area under PHC Hajipur have been found positive. Also, two policemen and a person from the area under PHC Chakkowal have been found positive. He said 588 new samples of people with suspected flu-like symptoms were taken on Wednesday. Five persons were reported positive out of the 551 reports received from the lab today. Dr Singh said total 19085 samples have been taken so far and according to the reports received from the lab, 17,702 samples have been reported negative, while the reports of 1,160 samples are still awaited. As many as 30 samples have been found invalid, 183 patients have cured, while active patients are 24.