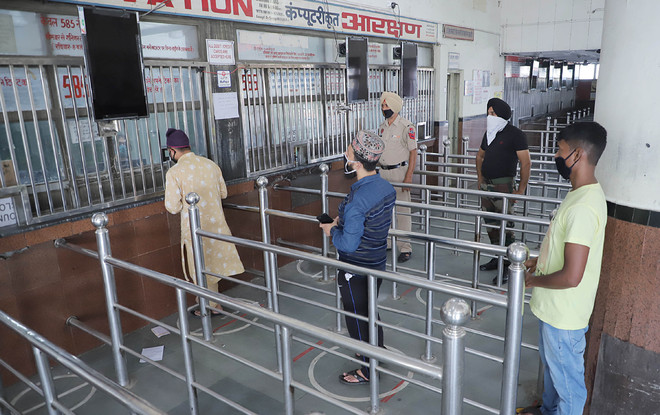 Residents stand in a queue in front of a counter at the railway station in Jalandhar on Saturday. Sarabjit Singh

Eight trains will move past the Jalandhar railway station as the Railways restart services from June 1.

While most bookings are being done online, some visitors at counters complained they were not getting tickets for journey prior to June 25. Radhey Krishan, who used to run a stall at the railway station, said he had come to book a ticket to his hometown Faizabad. “I have been rendered jobless and my wife and children are surviving on small savings that we had. I have been told that there reservation facility is not available at the moment,” he said.

Jalleshwar Mehra, who ran a stall of cold drinks, said he had earlier booked a ticket to Bilaspur in Chhatisgarh on April 12 and had come to get refund. “I live in the adjoining Bashirpura locality here with my family and have no work to earn a living. I am unsure when I will get work or return to my place,” he said showing the confirmed ticket of a Shramik train that he got earlier but was denied at the later stage.

An ITI student from Mehr Chand Polytechnic said he had come to seek refund of tickets that his family had booked for Faizabad last month to attend a marriage. “We could not go then, so I came to get back the money and see if there is any possibility of getting tickets booked any time soon,” he said.