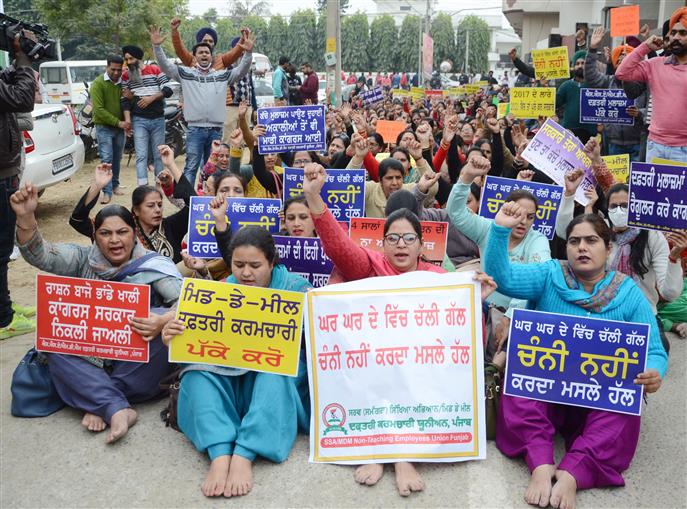 Members of the Sarv Sikhiya Abhiyan and Midday Meal Unions hold a barefeet protest outside the residence of Education Minister Pargat SIngh in Jalandhar on Wednesday. Photo: Sarabjit Singh

Members of the Sarva Sikhiya Abhiyan and Mid-Day Meal Office Employees Union today held a ‘barefoot protest’, holding a march up to the residence of Education Minister Pargat Singh. They said they chose this mode of protest as people walk barefoot to religious places. They said they held such a march as they hoped that their demand for regularisation will be fulfilled by the minister.

Union members said there had pinned hopes on Pargat Singh but they were all dashed. Even after 6-7 meetings of the Sarva Sikhiya Abhiyan and Mid Day Meal Office Employees with the minister, their issues reained unaddressed. Hence, they decided to hold the protest today.

After holding the march to his residence, they said they had been assured of a meeting on December 3 at 10 am with the minister.

Union members reiterated if their demand was not addressed on December 3, then they will hold a strike on December 6. They said the state government had made several announcements but they were not being addressed practically. The government’s notices and declarations were proving to be white elephants, they added. The said one of these recent announcements also included regularising 36,000 contractual employees. They said like former CM Capt Amarinder Singh, the new CM was also making committees and delaying works. The cabinet sub-committee made by the Channi government met on Monday but no minister is ready to speak anything, they added.