As markets open, shopkeepers put their items on city roads 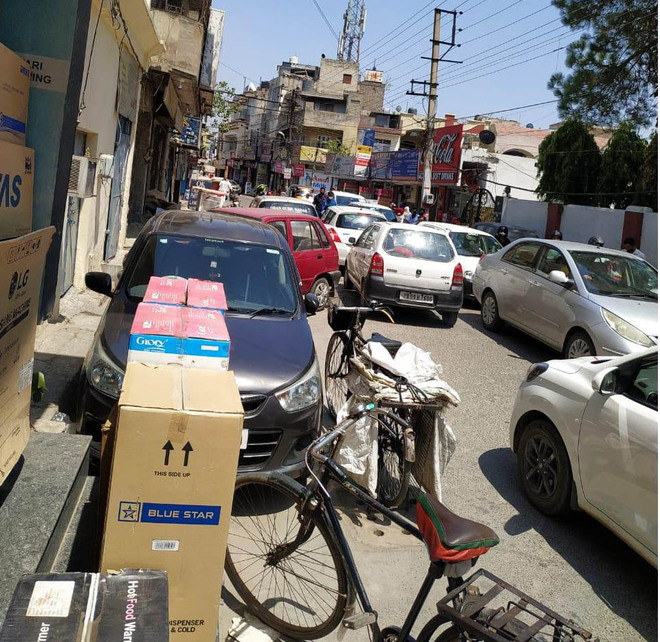 Shopkeepers have encroached upon space on a road at a market in Central Town, Jalandhar. Tribune photo

Post-lockdown relaxations, shopkeepers have returned to markets, so are encroachments. The city, which remained encroachment-free for a month, is set to witness chaos again. Vehicles could be seen at major locations jostling for space due to encroachments, causing huge traffic snarls.

Apparently with mercury soaring high, roads around electricity markets remain the most affected ones. Shopkeepers at the electricity market in Central Town have encroached upon roads by putting up their ACs and coolers, resulting in a traffic mess. As residents throng the market every day, the absence of traffic police personnel force drivers of auto-rickshaws, four-wheelers and two-wheelers to keep blowing horns.

Though the traffic snarls occur frequently throughout the day, except a few police personnel at the Central Town chowk, no other traffic police official was seen deployed on the road.

Traders on most of the roads have displayed their articles for sale, covering a considerable portion of roads, thus leaving a little room for vehicles to pass through. Even pedestrians face a harrowing time in markets. The vehicles parked in a haphazard manner leads to further trouble.

The civic body appears to have turned a blind eye towards the menace. Besides residents, shopkeepers also rue about traffic chaos.

Aditya Maheshwari, owner of ‘Glory Fans and Appliances’ said rush of vehicles had become a regular affair here and forget about social distancing, people even try to look for closest way to enter shops. There was no mechanism for the smooth passage of vehicles. Another shopkeeper said: “For the past two weeks, the rush of vehicles has returned in the market and it seems to be becoming a regular scene at the chowk. However, due to the absence of the traffic police, they had to face a lot of inconvenience.

Shopkeepers at the electricity market in Central Town open their shops after 9 am and these remain open till 6 pm. Fans, coolers and air conditioners are in demand at the shops. The sale even goes after 6 pm at many establishments.

Meanwhile, ACP (Traffic) Harvinder Singh assured that he would look into the matter and would deploy traffic police personnel to control the flow of vehicles.