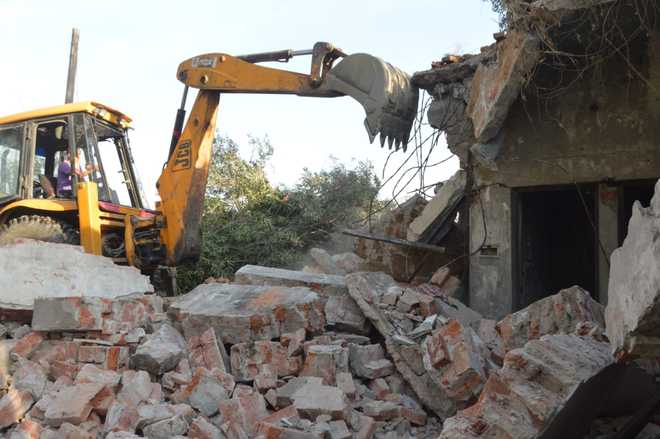 Encroachments along the road starting from Surya Enclave to Qazi Mandi were removed by the Jalandhar Improvement Trust here on Monday.

ML Sehgal, chief, Surya Enclave Extension Welfare Society, had been holding a dharna against the JIT saying that in 2011, the JIT had launched a freehold residential plot scheme for which final payments were given in 2014. “The JIT did not do any development and the scheme almost failed. Despite having spent lakhs of rupees on buying a plot in Surya Enclave Extension, a scheme launched by the Jalandhar Improvement Trust (JIT) in 2011, owners were yet to get possession of the land,” he had said earlier. JIT officials said possession of the plots would be handed over to the owners by tomorrow.

Daljit Singh Ahluwalia, Chairman, JIT, said that work would continue. “Also, the construction of a 120-ft road will also be started which will connect Domoria bridge and the Jalandhar-Amritsar highway and work will be completed in a month,” he said.

Around 40 families were given two-marla plots and were shifted there. Ahluwalia said, “This was one of the major projects on my priority when I had taken the charge and it has been completed today.”

The work of recarpeting the approach road of the BMC flyover started on Monday. The flyover had developed a crack in the month of February after which it had to be closed and the movement of vehicles was also restricted.

As per the information, the flyover will open to traffic from Wednesday onwards.

Mayor Jagdish Raja visited the site along with Building and Roads Committee chairman Jagdish Gag and councillor of the area Gurwinder Singh Bunty Nilkanth. The Mayor asked those involved in the work to ensure that no such problem arises in the future.

Notably, after the incident, or over three weeks, officials of the Jalandhar Improvement Trust, who got the bridge constructed in 2011, and the unicipal corporation kept on shifting the onus of maintenance on each other.