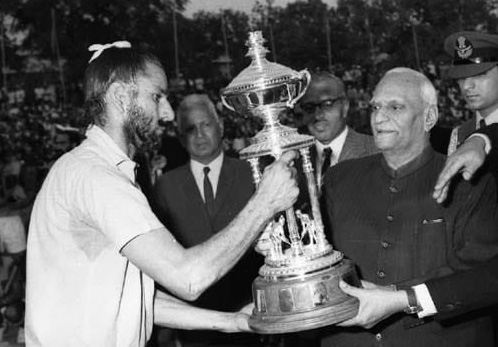 Subedar Modan Singh (retd) of the 4th Sikh Regiment, who was one of the most feared fullbacks of the domestic hockey of India in the late 1960s and 70s, passed away two days ago. He died at the age of 85.

Subedar Modan Singh was the Captain of the Sikh Regiment Centre (SRC) that won the Nehru Cup in 1965 and reached the final in 1973, getting runners-up trophy by then President VV Giri. Olympian Col Balbir Singh, who was his cousin, shared: “My grandfather Sepoy Jagat Singh of the 35th Sikhs, who fought World War I, brought his daughter’s son Modan Singh to Sansarpur, to ensure that he received good education. Modan learnt the rudiments of hockey on the hard surface of Sansarpur. The strategy of the British Army officers and those of the SRC after the Partition was to conduct trials at Sansarpur for spotting the talent and recruiting hockey players from my village and neighbouring area.

He further shed light from the history, “When Gen Harbaksh Singh of the Sikh Regiment sent a recruiting team headed by a Major (now Brig Retd) Shamsher Singh Minhas to Sansarpur in 1960, to enrol hockey players, Modan Singh made the cut and got enrolled. A fierce Modan Singh was always a dangerous player for an opponent as a minefield. He was never a welcome sight to the opposition. Many outstanding forwards of his time used to be scared of him.”