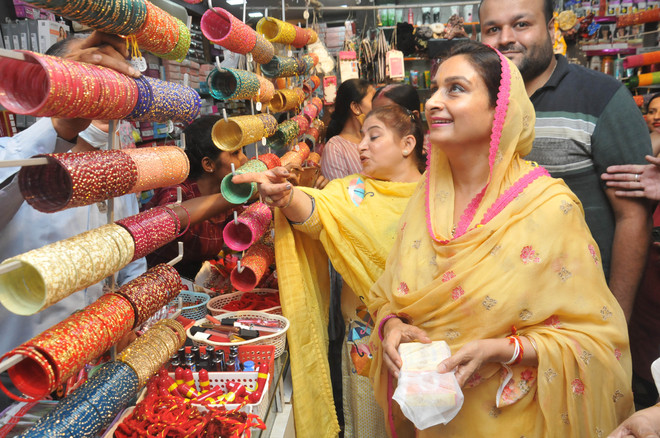 Harsimrat Badal during her shopping trip in a Jalandhar Cantt bazaar on Wednesday. Tribune photo

As ex-Union Minister and Akali MP Harsimrat Badal on Wednesday visited the city to campaign for two of the party candidates including ex-MLA Jagbir Brar from Jalandhar Cantonment and Chandan Grewal from Jalandhar Central, she spent her entire day here shopping for Karwa Chauth in the market paying several other visits.

She visited at least five holy shrines in the city, including Bajrang Bali temple and a gurdwara, in Jalandhar Cantonment along with party candidate Brar. With Valmiki leader Chandan Grewal, she went to three Valmiki temples today on the occasion of Valmiki Jayanti. These included a temple in Banda Singh Bahadur Nagar and two temples in Basti Guzan.

Taking half an hour round of Jalandhar Cantonment market area, she shopped for the coming Karwa Chauth festival. She bought few sets of bangles picking them personally from the stands after trying them.

She took lunch at the residence of Brar in Model Town. Prior to this, she also met the party workers at a palace in Jalandhar Cantt.