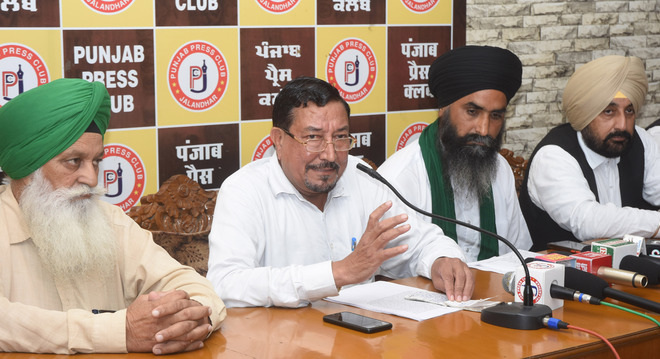 Farm leaders address a press conference in Jalandhar on Thursday.

Farm leaders under the banner of the Sanyukt Kisan Morcha announced to hold Bharat Bandh on September 27. Farmers will block all major routes — Jalandhar to Amritsar national highway —on Monday. Nearly, a dozen farm unions will participate in the protest, which will be held between 6 am and 4 pm.

“Let us raise our voice so that it reaches the ears of those sitting in the Parliament,” said a farm leader. They also sought support from locals and asked them to participate in the ‘Bharat Bandh’.

Satnam Singh Sahni of the Bharatiya Kisan Union (Doaba), said, “We are fighting tooth and nail to save farmers from getting exploited. Farmers and the country should be saved. We want better laws for all low-income groups. On the same lines, a day before the birth anniversary of Shaheed Bhagat Singh, we will mark 10 months of the historical farmers’ protest on September 27.”

Issuing guidelines for the ‘Bharat Bandh’ against the Centre’s three agri laws, the Sanyukt Kisan Morcha said the bandh would be peaceful and farmers would ensure that commuters face minimal inconvenience.

Farm leaders said only emergency services, including ambulances and fire services, would be allowed to operate during the bandh.