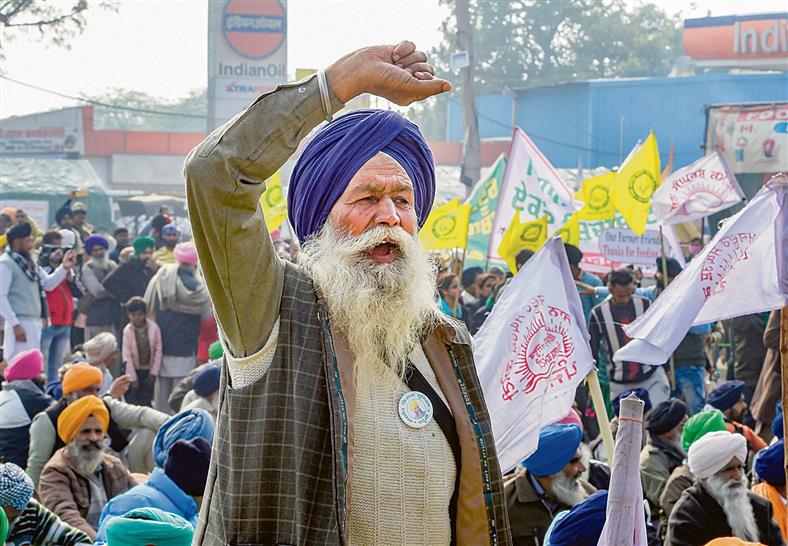 Ahead of the Republic Day celebrations, the demand for farm protest-related flags has surged in the market.

While local printing press dealers said 100-200 flags on farmers’ protests were being sold on a daily basis, there weren’t any such takers for the national flag as of now. Besides, members of various farm unions said despite making over 1,000 flags daily, they weren’t able to meet the demand.

Considering the tractor march scheduled for the Republic Day, many vehicles in the state are sporting flags of different farm outfits. Subsequently, apart from the farmers, the demand has doubled among locals too.

Pushkar Raj, a volunteer of the Kirti Kisan Union, who has been preparing flags of his union for the past three months at the Desh Bhagat Yadgar Hall, said, “Since mid-October, we have been designing and making flags for our union. Till now, we have made over 30,000 flags and are making 1,000-1,500 daily.”

Similarly, Jasbir Kaur, another volunteer, said they had a team of eight members who worked in shifts to prepare the flags. “The satin fabric is ordered from Amritsar. When we don’t get readymade flag-shaped clothes, we stitch them here. Afterwards, we have a painting board embedded with the logo of the union. We place the stitched flag there. It takes five-10 minutes to prepare one flag. Apart from flags, we also have stickers for bikes, cars and other vehicles. While we also supply our flags to Delhi and Haryana, the demand has increased manifold locally. At least five to six flags are being demanded from one family of farmers,” she added.

Narinder Kumar, a wholesale dealer of printing solutions and novelty items at Partap Bagh, said the demand for flags and stickers of farmers’ protest had increased in the past three weeks. “However, as schools and colleges are closed due to Covid, the demand for the Tricolour is dismally low. In addition, people are ordering farm union flags in bulk,” he said.