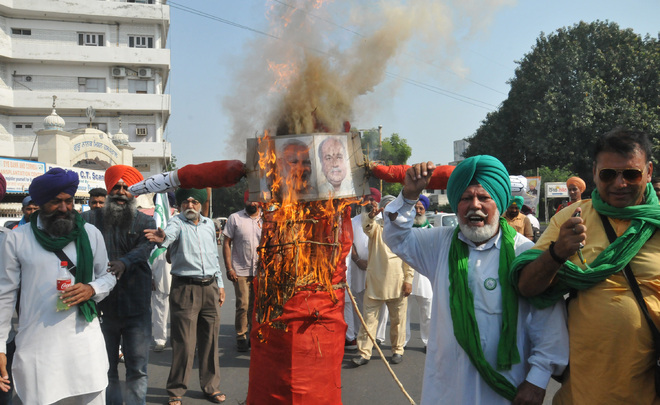 A day after Dasehra, various farm unions in the district burnt effigies of PM Narendra Modi and other BJP leaders, in Jalandhar on Saturday. Tribune Photo: Malkiat Singh

A day after the city witnessed celebrations of Dasehra, various farm unions in the district on Saturday burnt effigies of Prime Minister Narendra Modi and other BJP leaders. A group of farmers under the banner of Kisan Mazdoor Sangharsh Committee also left for Singhu border to join their protesting counterparts.

Kisan Mazdoor Sangharsh Committee, Punjab, Jalandhar district, burnt an effigy of the Modi government in front of the Shahkot police station today. A large number of farmers and their supporters gathered on the occasion.

Headed by Kisan Mazdoor Sangharsh Committee treasurer Gurlal Singh Pandori, effigies burnt around 4 pm. Speaking on the occasion Pandori and other leaders said, “The BJP-led Centre government has resorted to hooliganism and is hurting sentiments of the farming community.”

“Even after the heartbreaking incident at Lakhimpur Kheri (UP), the Centre government has remained mute. It’s depressing that the Centre is not even an inch close to repealing the controversial agriculture laws,” they added.