Govt has gone back on its promises, allege protesters 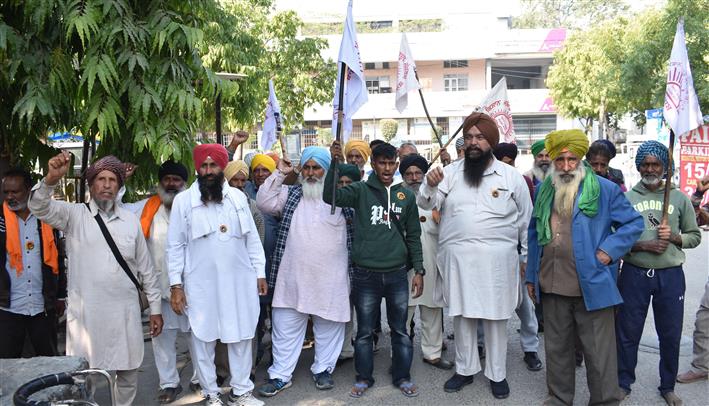 Farmers protest outside the Deputy Commissioner’s office in Jalandhar on Sunday. Tribune photo

Farmer leader Salwinder Singh Jania accused the government of going back on its poll promises and imposing its decision on them. He demanded that the government should stop the hounding of tillers who had worked on their land for ages. He also demanded the implementation of the Swaminathan report on priority and the clearing of river waters of pollutants like sewage and effluent from factories so that clean water is available for irrigation.

Farmers said waters of the Chitti Bein, Sutlej, Beas and other water bodies had been sullied by sewerage and industrial wastes from Jalandhar, Ludhiana, Phillaur, etc. They said this water if cleansed could be a precious resource to water fields through canals. They demanded that drainage system in the state be fixed and cleansed and clean water be ensured to the tail-end fields and farms for irrigation. They also demanded that trees be planted by drains, rivers, nullahs, streams and roads.

Other demands of the farmers are compensation and employment to the next of kin of those killed during the anti-farm law agitation, cent per cent subsidy for stubble management, relief for crops damaged in floods, cancellation of FIRs registered against them for burning stubble; land acquisition for highways at four times the market rate; and the state government’s resistance to the Electricity Act 2022.

Jania said farmers would continue the dharna oustide the DC office until their demands are met.