Farmers elated, but to stay put at Delhi borders 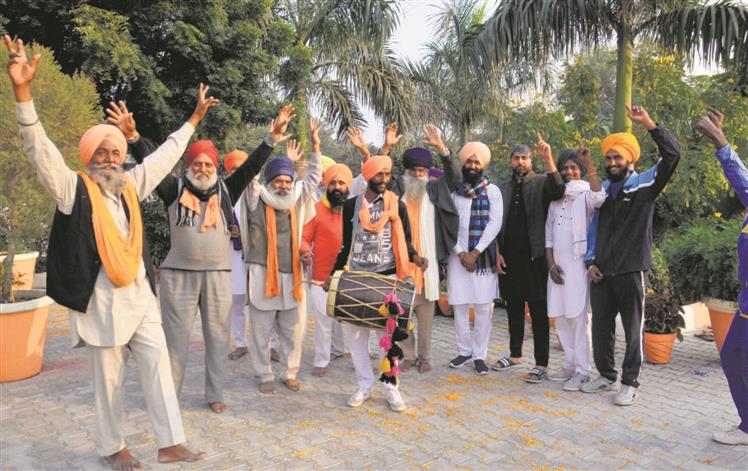 After Prime Minister Narendra Modi on Friday declared to repeal the three agri laws in the upcoming Winter session of Parliament (November 29 to December 23), a wave of jubilation spread among farmers who have been protesting against these laws for the last one year.

While photographs and videos of farmers dancing and celebrating at Delhi border did the rounds on social media, activists of BKU (Rajewal) distributed laddoos in the district on the occasion. However, wary farmers said they would end the protest at Delhi (Singhu and Tikri borders) after getting a nod from the Sanyukt Kisan Morcha. As the news broke out, farmers started heading out in jathas towards Delhi to celebrate the occasion.

Amarjot Singh Jandiala of the Bharti Kisan Union (Rajewal) distributed sweets and added that the the morcha would continue. Jandiala said, “The Centre has bowed infront of the grit and determination of farmers. It is a welcome move by the Prime Minister Narendra Modi-led government, however, the morcha is far from over yet. The protest has claimed lives of 700 farmers. It will continue as long as three farm laws are not formally repealed in Parliament. Till then all farm unions will continue to hold the fort at Delhi borders.”

Salwinder Singh Jania, district chief, Kisan Mazdoor Sangharsh Committee, said “A total of 700 farmers lost their lives. There are 700 homes, which have lost their loved ones. They did not celebrate Diwali or Parkash Purb. Right now, our organisation is also not celebrating. We will consider it as a victory only when the agri laws are repealed in Parliament. Our morcha will continue as long as laws are not made to grant MSP to farmers. Similarly, the Electricity Bill 2020, should also be withdrawn and those who killed farmers in Lakhimpur Kheri should be punished. Unless the Centre addresses all these issues, which are causes for farm distress, we are not moving.”

While many farmers, including those of the Bharti Kisan Union (Doaba) headed towards Singhu border today, some unions have schedules set until January for the farmers’ protest. A 500-member jatha of the Kisan Mazdoor Sagharsh Committee (KMSC) heads to Singhu daily, which will continue till the end of the month. Everyday, 15 people from each district go to Delhi. Farmers said a huge gathering on the lines of the one seen around the Republic Day this year is again expected to gather at Delhi borders in the coming days.

Not all issues resolved, says BKU

Joginder Singh Ugrahan and Sukhdev Singh Kokri Kalan, president and general secretary of BKU (EKTA-UGRAHAN) respectively, said the Prime Minister Narendra Modi-led government had to bow before the historical peasant struggle, but still it has not affected any change in its policies designed for the infiltration of corporates in agrarian sector. The decision regarding the movement shall be taken after today’s announcement is implemented by the government. Besides these laws, the issues of MSP, PDS and the Electricity Bill 2020 are still pending. The PM’s announcement does not even touch upon these demands. They said further strategy would be devised after due consultations with the Sanyukt Kisan Morcha.