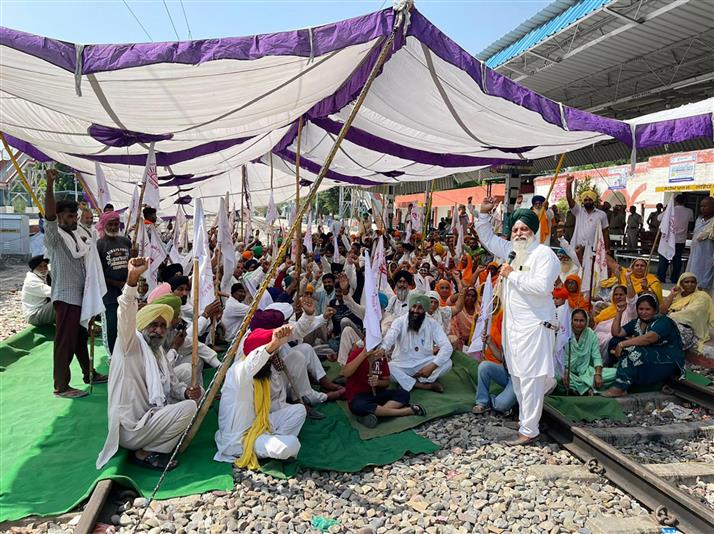 Farmers of the Kisan Mazdoor Sangharsh Committee block railway tracks at the Lohian Khas railway station in Jalandhar on Monday.

Farmers of the Kisan Mazdoor Sangharsh Committee held a three-hour long ‘rail roko’ protest at the Lohian Khas railway station to demand justice for those killed in the Lakhimpur Kheri violence.

Addressing a gathering at the railway station, farmers said the families of those who died in the Lakhimpur Kheri violence were yet to get justice.

They also demanded cancellation of World Bank-backed projects by private companies to cleanse and sell waters of rivers and drains, withdrawal of the Dam Safety Act, loan waiver of debts of farmers and labourers, action against drugs smugglers, free treatment and employment for drug dependents, adequate compensation to farmers for already converted highways; putting a stop to black marketing of sand and grit and reduction in their rates; Rs 50,000 per acre compensation for crops damaged in rains; compensation for cattle dead due to lumpy skin disease to their keepers.

Speaking on the occasion, farmers said the state and central governments wanted to enslave the people of the country by making new laws.

Farmers said the public had disapproved these bills. Warning the state government, they said if the government does not pay attention to their demands, then the struggle will be intensified by the union.

Speaking on the occasion, farmers leaders said, “Dozens of places in Punjab have a three-hour chakka jam today in protest against the mowing down of farmers at Lakhimpur Kheri. We are remembering those who lost life in the unfortunate incident. A meeting will be held on October 5 in which the future course of the struggle will be decided.”