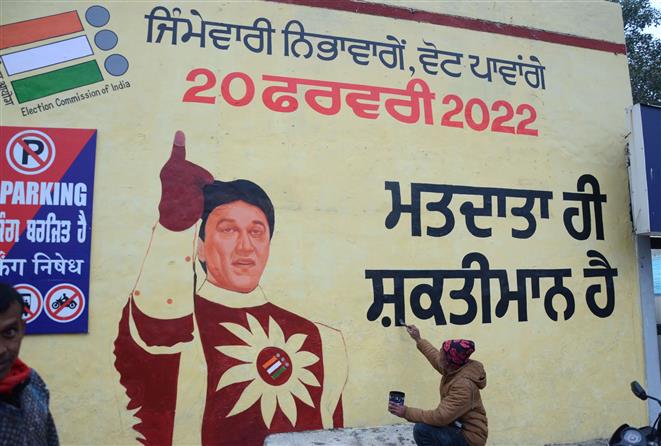 Be a responsible citizen A graffiti of India’s first superhero Shaktimaan to apprise residents of the importance of voting in Jalandhar. photo: Sarabjit Singh

Hans Raj Mahila Maha Vidyalaya hosted the district-level event organised to celebrate the 12th National Voters’ Day, in association with the District Election Office. Deputy Commissioner Ghanshaym Thori was the chief guest. He told the first-time voters that the selection of the leader was dependent on the honest conduct of elections. The event comprised a performance on the theme, ‘Meri vote, meri takat’, and a street play titled ‘Meri vote, mera adhikar’.

The DC released Punjabi Song ‘Voter Jugni’ prepared with the help of the students of the college besides launching the logo of SVEEP, Jalandhar. He also felicitated Phillaur SDM Amarinder Singh Malli, BLO Manju Bala, and SVEEP nodal officer Surjit Lal for outstanding performance under SVEEP activities while lauding the efforts of students for creating awareness among youngsters towards enrolment as voters. Meanwhile, the DC administered the oath of ethical voting to gathering and handed over EPIC cards to first-time voters as a gesture to motivate them to exercise their voting right judiciously.

Principal Ajay Sareen was honoured as the ‘Best voting event organiser’ by the District Election Office. She said the institution was organising National Voters’ Day celebration for the sixth consecutive year. The winners of various competitions were presented certificates.

A video-making competition was organised by the Electoral Literacy Cell to highlight the theme ‘Electoral literacy for stronger democracy’. Fifteen students exhibited multimedia skills by participating in the event. Khushi from BCA- Semester I, Sukhmanjot Kaur of BA-Semester III and Simran Pathania from BCA- Semester III were the top three winners. An oath-taking ceremony was also held, wherein the staff and students pledged to cast vote.

A webinar was organised to make students aware of the right to vote. Declamation, poster-making and poetry-recitation events were also organised. Principal Dr Kiranjeet Randhawa told students that voting was the basis of democracy. It was an effective medium to bring about the desired change in the society, she said.

The faculty and students attended a virtual session through the official YouTube link of the Chief Election Commission. They learnt about the importance of the day. The procedure to register as a voter was also discussed. Eligible students who did not have voter cards were encouraged to register themselves. The faculty and students pledged to cast vote in the coming Punjab Vidhan Sabha Elections. Students of MEd and Bed courses took part in an essay-writing competition. Kiran, Sakshi and Inderpreet secured the top three positions, and Neelam Rani won the appreciation prize.