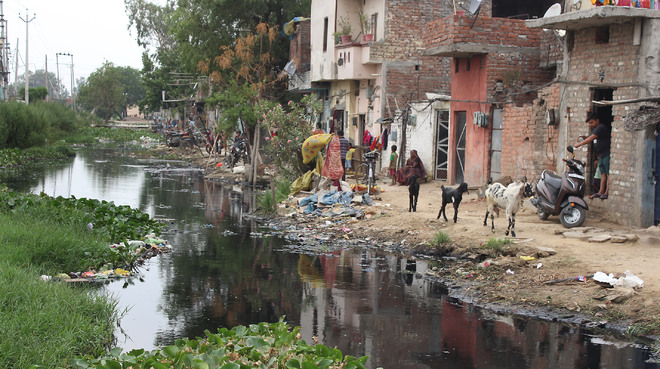 Jagdish Samrai, member of health and sanitation ad hoc committee and councillor Ward No. 78, on Monday, met MC Commissioner Karnesh Sharma and requested him to make sure that Kala Sanghian drain, commonly known as ganda nullah among locals, should be cleaned.

Samrai said the pandemic had already worsened the situation for people and the poor condition of the drain was only proving a double whammy for them. “I request you to kindly pass Rs40 lakh for the cleanliness and beautification of the drain under Smart City project,” said Samrai.

The cleansing and beautification of the drain will benefit more than 2 lakh people. Samrai also raised the issue of the bridge over Kala Sanghian drain, near Mohalla Ratan Nagar, and said it was not in good condition. “Side grills and fences were broken. It should be renovated soon because a large number of people cross the bridge on a daily basis and any irresponsible action towards this problem will create big problems,” Samrai complained.

He said the monsoon season was in and with rains, there was a high risk of mosquito breeding accompanied with several health hazards. “Amid the pandemic, the cleanliness of the drain is need of the hour and must be looked at as soon as possible,” Samrai said.

Notably, with every passing year, the condition of the drain is deteriorating and people residing in the area are facing many problems. With foul smell emanating from the drain that is filled with dirt, garbage, filth, sludge, chemicals, factory waste, it is not easy to stand at the spot for long. But there are scores of residents, who have been living on both sides of the drain for decades and have been a troubled lot.