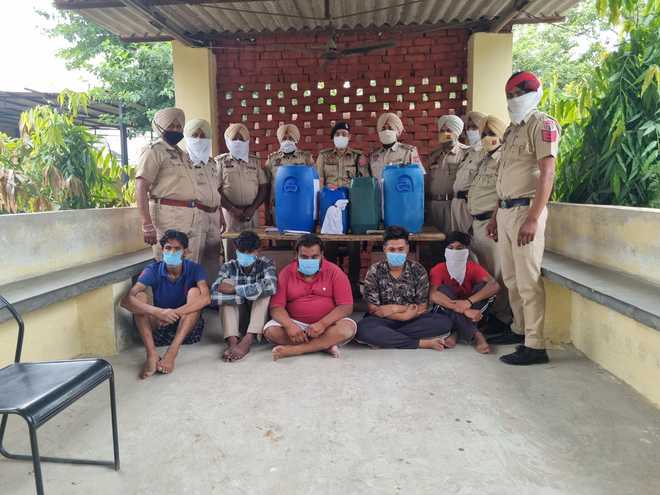 The accused in the custody of the Kapurthala police. tribune photo

The Kapurthala police busted a gang involved in the theft of transformer oil on Tuesday by arresting seven of its members and recovering 145 litres of oil, a Swift (PB-09-AH-6729), 14 buprenorphine injections and 14 vials of pheniramine maleate injection from their possession.

Senior Superintendent of Police (SSP) Harkamalpreet Singh Khakh said, “We had been receiving several complaints from the PSPCL and the locals about the oil theft from transformers causing disruption in the power supply.”

He said all SHOs were instructed to keep a tab on the crime and today, a police team led by SHO Sadar Kapurthala Gurdial Singh, under the supervision of DSP Kapurthala Surinder Singh, arrested the accused and made the recovery from them. “A special type of oil is used in transformers for cooling purposes. Once the oil is stolen, the transformer gets heats up and catches fire,” said the SSP adding that the oil has a huge demand in the metal industry for its use in welding machines.

HPS Khakh said the arrested accused have confessed of dozens of such thefts in the district and a case has been registered against the accused at police station Sadar Kapurthala under Sections 399 and 402 of the IPC and Sections 22, 29, 61 and 85 of the NDPS Act.

The accused would be produced before the magistrate and their remand would be sought to further investigate the matter and trace the links. The kotwali police also arrested two persons of similar module for stealing cables and electric equipment from motor pump room of a farmer in Kanjli village.