Get ready for Surya Kiran air show on September 17, 18 in Jalandhar 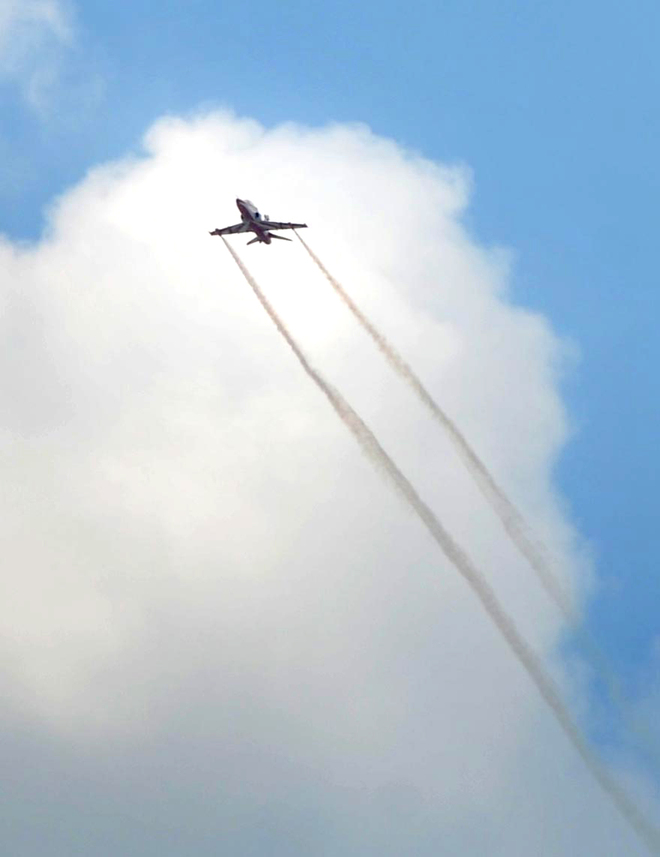 A Surya Kiran acrobat team during a practice drill days ahead of an air show at Adampur. Photo: Sarabjit Singh

The city residents got a treat for the eyes as they watched with awe the speeding jets of Surya Kiran aerobatic teams making various formations in the skies this afternoon.

Nine pilots of the special team had taken off from Adampur to practice today three days ahead of the air show slated for September 17 and 18 being organised by the Indian Air Force and Vajra Corps at Katoch Stadium in Jalandhar cantonment.

Squadron Leader Navjot Singh, who is a 2006 passout of Sainik School, Kapurthala, too, is a part of the squad that will perform daredevil acts in the air.

Sq Ldr Navjot Singh shared: “We had practiced here for our upcoming air shows. We have one in Jalandhar on September 17 and 18 and another at Sukhna Lake in Chandigarh on September 23 and 24. We will make various patterns and formations, which will not just be visible from the designated venues but up to several kilometres around the area. For instance, during our event in Jalandhar, people even residing in Model Town will be able to watch us perform from their rooftops around 9.45 am.”

The crew members based at Bidar in Karnataka shared that the event was a part of the ongoing Golden Jubilee celebrations of the 1971 Indo-Pak war. The team has already performed in Issewal, from where Flying Officer Nirmal Jit Singh Sekhon, PVC awardee, hailed.

In the coming days, the team will also be performing at the borders of Ferozepur and Amritsar. “We will also have flypasts atop military feeder institutes, including Sainik Schools in Kapurthala, Kunjpura, Godda, Sujanpur Tira and Nagrota, besides Rashtriya Indian Military College and Rashtriya Military School, Chail,” said Sqn Ldr Navjot Singh, adding that the show was also aimed at showing the valour and to attract the youth towards the armed forces.