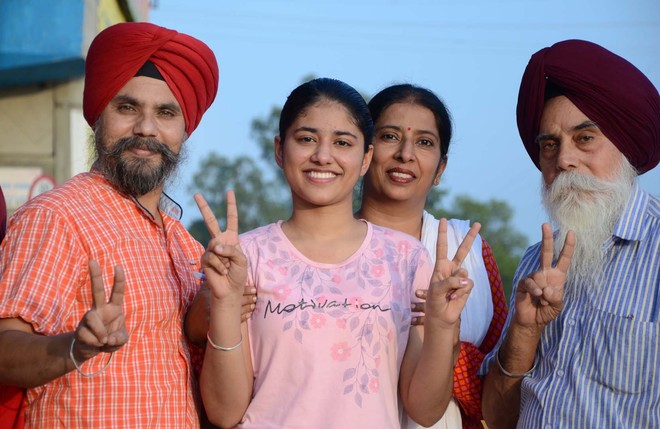 Girls stole the limelight in the Central Board of Secondary Education (CBSE) Class XII results by bagging top ranks in non-medical, commerce and humanities.

In commerce, the six of the seven top slots remained with girls. The top-three positions in non-medical stream, too, were that of girls even though boys were known to have an edge in this stream. Humanities stream, too, had girls holding on to top ranks. The only exception has been the medical stream, wherein boys managed to secure the second and third slot in the district.

Sharing her take on topping both district and the commerce stream, Abheya, said, maintaining consistency throughout the preparation was the key mantra that helped her in learning every topic precisely. “Besides hard work, following a proper timetable and focus was a must in obtaining good grades. Good marks cannot be attained by studying at the last hour. Instead, the last days should only be utilised for revision and maintaining pace in every topic,” Abheya said. She said she did not take any tuition for the board examination and her score was completely on the basis of self-study.

However, she expressed her gratitude towards her parents and teachers, who were very supportive in keeping her motivated throughout the year. A resident of JP Nagar, Abheya had also bagged all-India rank 3 in her Class X exams. Aiming to get into the field of finance, she is now satisfied with her score, as it has opened several other scopes for her.

Non-medical topper Jasmine said: “I’m very happy because I wasn’t expecting this result. I hadn’t studied for a good percentage because I was so busy preparing for the entrance exam. However, this has boosted by morale and will help me in performing better for my future endeavours”

The other two toppers of non-medical stream, Brahmjot Kaur and Harmanpreet Kumar, while sharing their success mantra, said: “Study well and in an organised manner. The key is to stay calm and composed while studying. Never burden yourself with syllabus. Rather, prefer reading chapters one by one with a cool mind.”

Medical toppers Abhay and Sonika, said they both were preparing hard to crack the NEET and aspire to become doctors. “I did not follow any fixed schedule. I only followed a deadline which I had set for myself for a particular day,” said Sonika, adding that she credits her teachers for the success as they were really supportive and guided her at every step.

Humanities topper, Anushka Poonia, daughter of an Army officer, said she remained disciplined throughout the year and concentrated on maintaining a consistency. She scored 491 marks out of 500 with 100 in economics, 99 in English and business studies, 98 in psychology and 95 in maths.

“Meticulous planning of all subjects every day helped me in scoring well in the board exams. I used to study for 8 hours every day and took every test seriously,” Poonia said.

Ecstatic to have bagged the second position in the district, Isha said this was the first time that she had excelled in her academics. She was sure about scoring around 95 per cent marks, but achieving more than that today definitely surprised her.

Anushka Poonia, a student of DPS, bagged the first position by scoring 98.2 per cent marks; while Anagha Ragesh from Army Public School remained at the second spot with 98 per cent marks. The third position was secured by Arushi of Cambridge International School with 97.6 per cent marks.