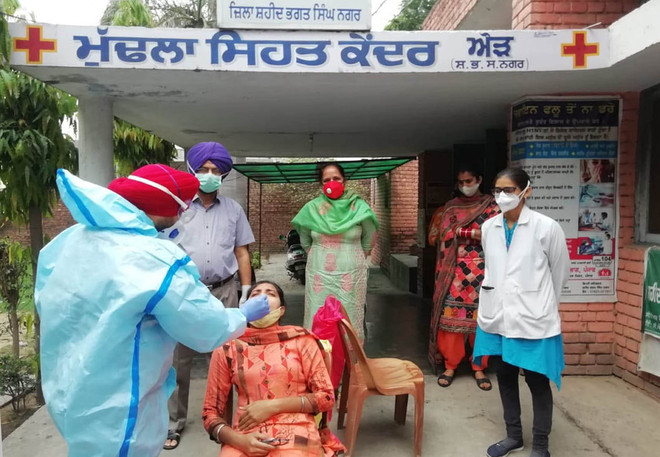 In the past 15 days, 140 patients have succumbed to Covid in the district. A total of 12 persons died and 673 fresh cases were reported in the district on Sunday. Out of the total deaths reported on Sunday, 41 were from other districts. With this, the toll has increased to 1,239. The number of active cases has also crossed the 5,000 mark taking the count to 5,477.

Under the intensified RT-PCR testing drive, 9,92,927 samples have been collected in the district, out of which 53,622 people have tested positive so far and the maximum number of cases has been reported this year.

Meanwhile, having performed the last rites of a suspected Covi patient at Barring village on Saturday, the district administration today once again ensured the cremation of a migrant labourer at the Maqsudan crematorium.

SDM Dr Jai Inder Singh asked the management committee of the Baba Dada Mal Shamshan Bhumi Sudhar Sabha to make arrangements for the last rites of a 40-year-old migrant labourer, Jai Kishore Yadav of Darbhanga, Bihar. DC Ghanshyam Thori said the deceased was admitted to the Jalandhar Civil Hospital on April 28. “He had tested positive for Covid and died the next day. His body was kept in the mortuary by the hospital authorities but nobody came forward to claim it,” he added.

Thori said the police traced the whereabouts of the deceased’s family, who when contacted, refused to claim the body and requested to cremate him as per the medical protocol.

A total of 103 cases were reported and two patients succumbed in Nawanshahr today. The deceased include a 69-year-old man from Muzaffrapur block and a 44-year-old woman from Mukandpur. Maximum number of cases continued to be reported from Balachaur block at 26. Total number of positive cases in Nawanshahr is 10,198 and the active cases are 838 and 745 are under home isolation.