Have reservations regarding political tokenism, say Dalits : The Tribune India 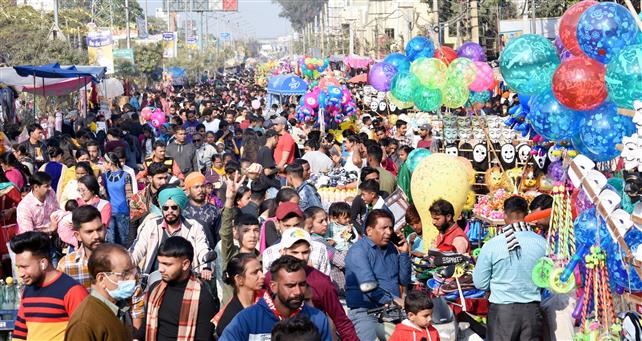 Residents visit during a fair held on the occasion of Guru Ravidas Jayanti in Jalandhar on Wednesday. Photo: Sarabjit Singh

While all politicians paid tributes to Guru Ravidas on his Jayanti on Wednesday, ahead of the 2022 state elections, Dalit leaders have reservations regarding whether the political tokenism will have any social or electoral ramifications on their lives.

The Prime Minister, state Congress CM Charanjit Singh Channi and Congress leaders Rahul Gandhi and Priyanka Gandhi and Delhi CM Arvind Kejriwal all paid tributes to Guru Ravidas during the celebrations of his Jayanti on Wednesday. While thousands indulged in mega celebrations of the birth anniversary of Shri Guru Ravidas and people from Punjab headed to Varanasi to pay obeisance at his janmsthali, leaders say their ground realities remain unchanged.

On the surface, it might seem a lot of political decisions are being taken with us in mind, but at the ground level, our struggles and issues remain the same. We need jobs, implementation of the postmatric scholarship scheme, regularisations and decent livelihoods. Be it Ravidassias or Valmikis, our needs are the same. We all need jobs. While the Congress has pegged a Dalit CM in their 111 days of government, our issues haven't been addressed. They have been claiming they regularised employees, but at Adampur many are yet to be regularised. Similarly, the PM accorded greetings but nothing much substantial regarding the issues of community was said by him. Jassi Talhan, president, Guru Ravidas Tiger Force

Of the 32 per cent of the state’s Dalit population, as many as 60 per cent belongs to the Ravidassia community. A majority of the state’s Dalit population is based in Doaba. Guru Ravidass’s teachings and ideals are venerated among the community, which has a broad base and also includes a sizeable number of populace of empowered citizens and and NRIs.

While the state elections had also been scheduled on February 14, it was after a very public outrage from the community, that the date was eventually shifted to February 20.

Last year the Ravidas Jayanti had been celebrated with aplomb by the farmers’ outfits in the middle of the Kisan Andolan in Delhi.

However, ideologues say ground-level amenities elude the poorest of Dalits and most of the promises and sops in the popular political discourse remain unrealised at the ground level.

Jassi Talhan, president, Guru Ravidas Tiger Force, who also sent langar for 58 days to protesting teachers on dharna in Jalandhar said, “There is no political party for the poor. Job seekers and employees are fighting lonely battles. We ask for employment and handing of jobs as per categories. Jobs should go to people as per merit and poverty. From poor families at least one person is each family should get a job. Earnest efforts should also be made to educate students from poor families. At present, education suffers.”

Author Desj Raj Kali said, “Governments have never prioritised the Dalits. They have always focused on dividing people. A lot of politics is done on the basis of numbers and strengths of communites even among the Dalits which is very dangerous. Dalit issues collectively haven’t been given precedence. Issues like unemployment, hunger, education, post matric scholaraship and their provison to those who need these, should be given precedence. Mostly politicians are busy dividing people on the basis of ethnic identities like the British did.”