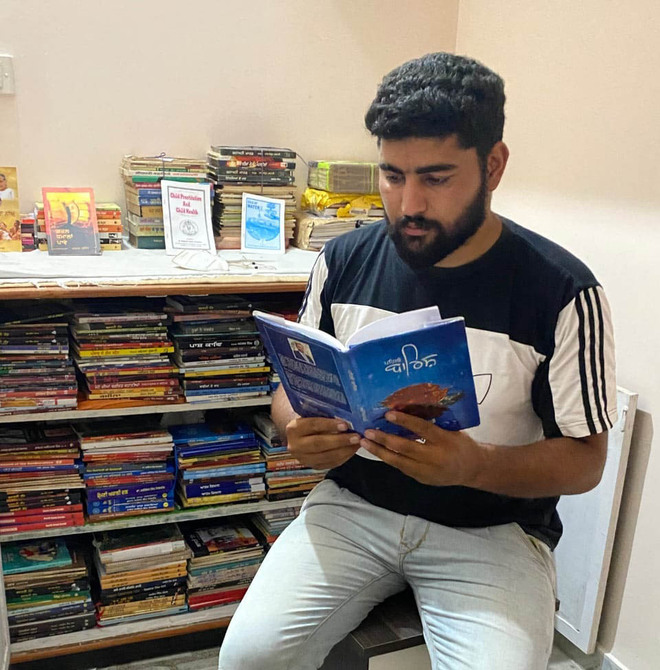 For the love of books: 26-year-old Mandeep Singh lends his own space for the noble initiative. Tribune photo

While people donating immensely for temples, gurdwaras, or other development works is common site these days, but a youngster putting in efforts and showing zeal to open a library is rare! Mandeep Singh (26), who is a government job employee and an avid reader from Sultanpur Lodhi, is a fine example of such an initiative. For those who have never had any chance to read, or those who are beginners, or want to prepare for competitive exams, the library will prove to be a blessing for them.

‘Pind di library layi kitaba di madad kro ji’, a poster is doing the rounds on the social media where Mandeep has urged people to donate books for the library he is going to start at Jabbowal village in Sultanpur Lodhi. The library will be named ‘Tera Tera library’. Mandeep has dedicated his own space for the library. In the poster, the youngster has urged people to donate books for a library that is going to come up at the village. So, if anyone has already read spare books at their homes, they can donate them for this cause.

He has also reached out to writers and artists to support him in this initiative, and has been getting a good response in this regard.

“Until now, I have received more than 250 books from writers and publishers. The library will start this week,” he said, adding that now, he has books in Urdu, Punjabi, English literature, novels, apart from various magazines and newspapers. He has also got books from the Languages Department.

Never in his life, has he missed any book fair. This love and dedication played an important role in pursuing Mandeep to take this praiseworthy step of opening a library where there would be free access to everyone who wants to read. He said he was already in touch with several publishers because he would always purchase books to read and he would attend every book fest.

“The books will be given for free and youngsters will be able to come here to prepare for their competitive exams and if any writer wants to have discussions, it will happen in the library,” he said.