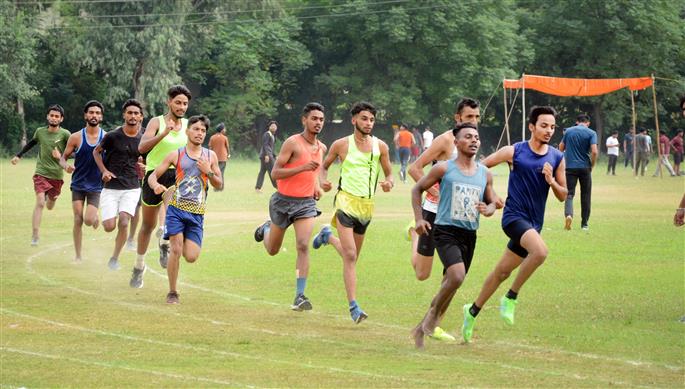 Athletes participate in a 1,500-m race in Jalandhar on Wednesday.

‘Khedan Vatan Punjab Dean’, a 10-day sporting extravaganza, came to a close on Thursday. Nearly 7,000 participants made the games an unprecedented event that brought the hidden talent to the fore. Tribune reporter Aparna Banerji and lensman Sarabjit Singh capture the fervor and energy on the field.

The ‘Khedan Vatan Punjab Dean’ was a 10-day sporting extravaganza which began across the district on September 12, and saw contests in 22 games at as many as 10 venues. From Under-14 to 50-plus age groups, nearly 6,000 to 7,000 students participated in the games.

While the sporting event has been hailed for bringing together three generations and giving stage to the unprecedented talent, it has also helped in understanding the infrastructural challenges in the region. The need for better tracks and all-weather swimming pools was felt during the games. Some also rued the lack of sporting events in some categories, such as in swimming, especially for those over the age of 40.

Regvinder Bhatia, Lecturer, Physical Education at Government Senior Secondary School, Mand, whose school bagged many awards in the games, says: “The games have been such a deep learning experience. It is for the first time that I competed in the same games as my students. There were sufficient arrangements. They also provided a platform to many poor students who would never find it otherwise. Undoubtedly, this will inspire more students to play in future.”

He added, “The intention is noble, but there is a great need for infrastructure in the district. An all-weather indoor swimming pool is a big requirement. Also, the completion of the much-awaited synthetic track at the Sports College will enable many athletes to up their game. At the moment, the participants have to make do with grass tracks. It is not enough to prepare them for international games.”

District Sports Officer Lovejit Singh said, “It has been a great learning experience for us. For about a month, we have remained on the ground, organising games. Much sporting talent has been discovered during the games. The winners of these contests will compete at the state level. It is a matter of pride for us.”