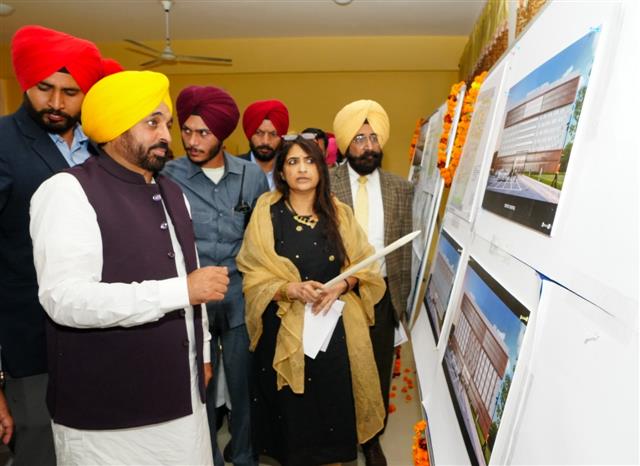 CM Bhagwant Mann gets details about the site plan of the proposed medical college in Hoshiarpur.

In the beginning of June 2022, Chief Minister Bhagwant Mann ordered a probe into a scam which led to the financial crunch at PIMS, Jalandhar. Five months later, the Chief Minister on Sunday paid a visit to Kapurthala with the sole purpose of reviewing the project of the medical college in Kapurthala.

With the go-ahead from the CM for Doaba's only government-funded medical college (PIMS is funded in the public-private partnership mode), the project has given a new hope to Doaba residents for a functional state-of-the-art government medical facility which will finally address the medical woes of the hitherto ignored region.

With PIMS languishing under a slew of controversies (the CM-ordered probe being the latest), Doaba lacks a state-of-the-art facility to cater to the medical needs of the region even as private hospitals in the Jalandhar region happily fill the vaccum. The citizens of Punjab last heard about the Kapurthala medical college project ahead of PM Narendra Modi's visit to Ferozepur on January 5. It was then slated to be inaugurated virtually.

Thereafter, with no fresh declaration regarding the project publicly by either the state or central government since then, most had thought the project lay suspended until a better opportunity came. The CM's visit on Sunday, thus, caught officials, doctors and bureaucrats by surprise. Rumours of his visit began doing rounds only on Saturday evening and it was only on Sunday morning that the official invite was issued to the mediapersons. For a Rs 428.59-crore project, many deemed the visit abrupt, even though much required for the region.

Rajya Sabha MP Balbir Singh Seechewal said, "I received the official intimation regarding the CM's visit only on Sunday morning. I wasn't aware of the purpose of the visit. This project hasn't been discussed earlier. It was for the first time that I saw the plans and maps for the same as the CM reviewed them. However, it is good if such a project and a medical facility come to the region as it is much needed."

The project hasn’t yet been inaugurated but the CM’s visit has put things on the fast track. It is a very ambitious project in which the CM is showing a keen interest. Dr Karamjit Singh, Nodal officer, Kapurthala Medical College