How to fly high in life 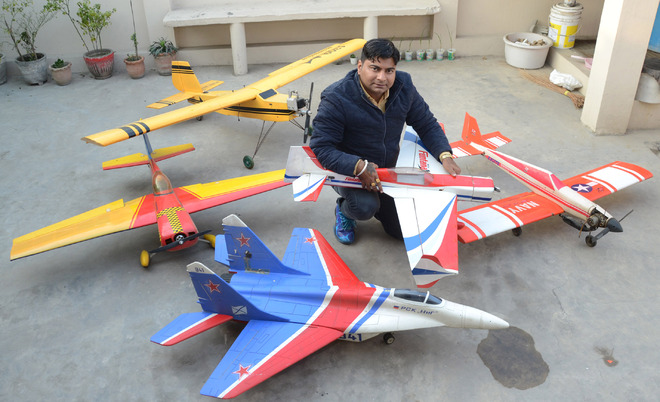 Having got started as a hobby during his NCC days in DAV College, aeromodelling is now a full-fledged profession for Amandeep Kataria (36), based at Ekta Nagar along the 120-ft road here.

Though Kataria graduated in Arts, his profession has more to do with the engineering work, for which he says that he never took any formal education. “I call it all ‘jugad’ (craft) and use of ‘Google baba’, of course after having taken an initial training from Aero Modelling Instructors (AMI) at NCC. Model aircraft, helicopters and drones designed and assembled by me are being purchased by some Army officers, students of LPU’s Aeromodelling Club and some enterprising youth of Ludhiana, Amritsar and Chandigarh. I got most of the contacts during my stint as a volunteer AMI with the NCC here for about seven years,” he shares, proudly showing his collection at the workshop.

Kataria shared how he does it all. “This work involves a lot of time, fine labour and money. In addition, several items have to be imported. The body of the model aircraft has to be readied from shafts of Ecuadorian balsawood, which has unique property of being superlight. After designing, the shafts have to be covered using colourful vinyl tapes or monocoating. The motors to be fitted inside have to be procured from Taiwan, Japan or the US as per requirement.”

Things do not just end there. Various types of fuels like nitromethane or its mixture with methanol and castrol has to be readied for checking its functioning. There are only a few spaces in city wherein flight testing can be done. “I usually prefer going to Gakhal village just on the city’s periphery,” he said.

Demonstrating the use of his various model aircraft, he showed that some more sophisticated ones can even carry a weight of 10 kg. “The range is huge depending on purpose. I customise the equipment as per the demand. Some people also want simple remotes, others want micro-flight controllers with proper panels for view and there are still others who want Digital First Person View (FPV) system as well for proper simulation. I have also catered to some orders for bomb-diffusing UAVs and assembled hexa drones with fitment to carry DSLRs for high quality video and still shots. So, accordingly the prices of all these items vary from Rs35,000 to Rs18 lakh,” the aeromodeller said.

Kataria quips, “These orders are not very regular as items are highly priced and only a few people who are very passionate and trained for the purpose are using it.” To have an alternate, regular source of income, he is also working as software and website developer alongside taking up all sorts of job works.