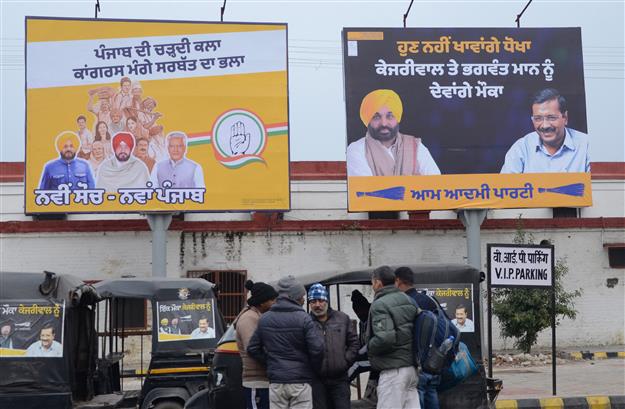 Phagwara: The Aam Aadmi Party (AAP) in Phagwara on Saturday pledged complete unity for ousting corrupt parties, including the Congress, BJP and Akali-BSP alliance from Phagwara. In a meeting held here, district president Gurpal Singh Indian, district secretary Nirmal Singh, district finance secretary Harjinder Singh Virk, district doctor wing Dr Jagjit Singh Virk and others welcomed the decision of the party to field former minister Joginder Singh Mann from Phagwara Assembly segment. They said the AAP unit will unitedly make efforts to bring AAP government in the state and make Bhagwant Mann as the next CM. They said no stone would be left unturned to oust corrupt parties such as the Congress, BJP and Akali-BSP alliance from Phagwara. OC

The hoardings having Delhi CM Arvind Kejriwal and Bhagwant Mann’s pictures with new slogan are being installed at various locations in the city. When asked to a few AAP workers about the slogan, they said: “We now have a proud Punjabi face who will lead the party to victory. His name and photo in all hoardings and banners of the party is a must, therefore, we decided to rehash the slogan.”

They said the slogan ‘ek mauka Kejriwal’ nu has already got popular and they were using it for campaigning before the CM’s face announcement. But from now onwards, all official hoardings and banners will have both AAP Supremo and Mann’s pictures.

Sharing details about their campaign, they said: “We are working on such slogans and designs that will show party’s ideologies and the changes they would bring in Punjab after being elected to power. Apart from door-to-door campaigns and other programmes, our main focus is online campaigning,” they said.