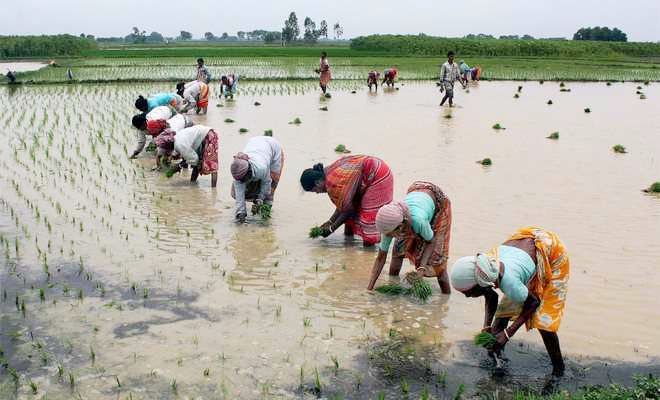 Providing extra ration to workers, asking them repeatedly about for their well-being and stocking up medicines for them - this is how farmers took care of farm labourers when the lockdown was announced. They were visiting chemist shops with labourers to help them get medicines and other essentials items so as to hold them back. They did all this just to ensure that the workers don't go back to their native places.

But, scores of labourers did leave, some boarded 'Shramik' trains, while others chose to go either by bicycles or on foot. The labourers who are here are now charging twice than they used to. The farmers say that this is new normal and even in the coming seasons, the farmers would require labourers.

"Labourers know that the farmers won't be able to do anything without them, therefore we are left with no option but to agree to their demands," said a farmer adding that now they would have to work and act according to their whims and fancies. Jaswant Singh, president of the Bharti Kisan Union, said the labourers would always demand high wages now.

Kirpal Singh from Shahkot area said the farmers were now mulling over not sowing the crops requiring much labour.

Another farmer Manjit Rai from Hoshiarpur said since paddy crop was highly dependent on the labour, the farmers would now opt for direct sowing of paddy.

Apart from this, the Agriculture Department has also been advising the farmers to take adequate precautions during harvesting of crops.

The farmers have been asked to sanitise combines that would be used for harvesting. They have been advised that since the workers will move from village to village during harvesting, they must be allowed to rest in an outer area. Major Singh, a farmer from Nawanshahr, said adopting proper precautions such as social distancing and sanitisation of the machines would become an essential part now.

It is important that farmers wake up now and switch to the crops that don’t require much labour. We know the condition now and one must always act as per the situation. I have decided to shift from sowing crops largely dependent on the labour. —Kirpal Singh, Farmer

This problem is going to remain with us for a long time and thus, the issue related to the farm labourers would also continue. We really want government to support us. It is not easy to switch to other techniques so soon. —Sukhwant Singh, Farmer

We would have to adopt social distancing for some more time to prevent the spread of Covid. Sanitisation of the machines would be the new normal and labour problem would also continue to haunt us for a long time. —Jaswant Singh, Farmer