No parade, cultural show this time, Cooperation Minister Sukhjinder Randhawa to wind up speech in 25 minutes 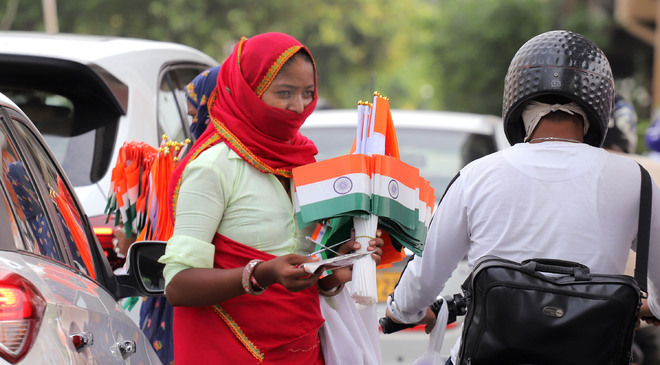 A woman sells flags to commuters at a traffic light point in Jalandhar on Thursday. Sarabjit Singh

The district administration will commemorate the 74th Independence Day by dedicating the function to Covid fighters, who were invincible during their duties amid the pandemic.

Deputy Commissioner Ghanshyam Thori said this on Thursday while reviewing the final preparations for the day, which largely includes guard of honour by a single contingent of the Punjab Police. There will neither be any march past nor any cultural show. The entire programme which will include unfurling of the flag by Cooperation Minister Sukhjinder Randhawa and his speech is slated to wind up in just 25 minutes.

He said the celebrations would also include special honour of the ‘Covid Warriors’, who contributed wholeheartedly in this battle against novel coronavirus despite a spike in cases. He said the country would ever remain indebted to medical professionals, cops, sanitation employees and others who remained on the frontline and risked their lives in the battle against the pandemic by performing their duties zealously and fearlessly.

He said due to the prevailing situation arising out of the pandemic, children and elders have not been invited.