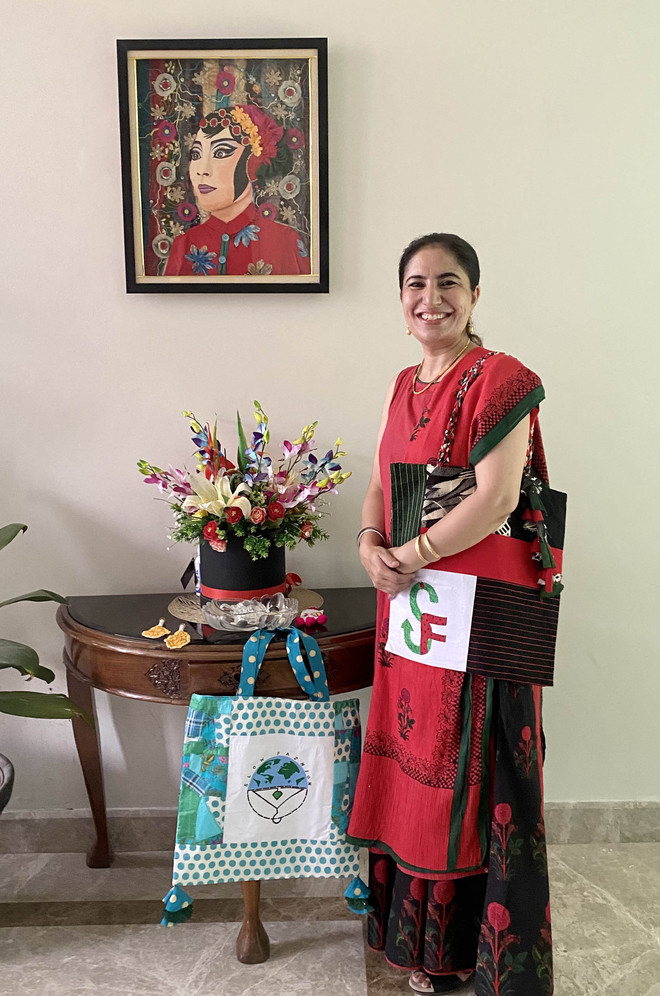 Harpreet Kaur of KMV College, showing bags, wall hangings and other designer items for which she has got 12 IPRs.

Jalandhar city boasts of a number of educational institutes. Besides academics, these institutes are also increasingly becoming centres of innovation and research. The pandemic has given the professors and technocrats more than the usual time to think and develop newer products. The institutes on their part, too, have been encouraging its faculty to develop newer technologies, especially with regards to Covid-19. Tribune correspondent Deepkamal Kaur interacts with some of these technocrats to find about their latest inventions:

Head of the PG Department of Fashion Designing of KMV, Dr Harpreet Kaur was always keen in refurbishing her clothes, upcycling them or re-purposing and re-designing them. It was in fact her this style which brought her 12 IPRs by the Copyright Office. She has done these works along with her associates including her namesake Harpreet, Minaal, Maninder Kaur, Navneet, Simerjeet, Rita Kant, Harpreet Tuteja and Navdeep. Dr Harpreet shares that she began working on patents after her PhD which was on “Developing Techniques of Upcycling Pre and Post-Consumer Textile Waste for Sustainable Growth”. She shares: “I always thought of pursuing my PhD work on Kashmir shawls but I realised that there was not much I could contribute. My husband suggested the topic as he felt it was a way of life with me. Soon I filed two IPRs in artistic category of copyright. After that, I gained confidence and soon there was no looking back. Having got 12 patents, there is one more in the pipeline and a few others in the preparation stage”.

Popularly known as ‘Rancho of Jalandhar’, Dr KS Nagla, Associate Professor, Department of Instrumentation and Control Engineering, Dr BR Ambedkar National Institute of Technology, has five patents to his credit. Recently, he shot into limelight with his new technology ‘Cuterobot’, a robotic device for the supply of medicines, meals and other items for a patient admitted in a Covid ward. He has been into designing new products for the past many years. His first invention was an earthquake alarm, the patent of which was granted to him in 2004. He got the second patent for developing a mechanism to clean the poultry farm in 2007. Next was an induction hardening machine for treating equipments which a patent was granted in 2014 and then a leg exerciser machine. This year amid pandemic, he also got a patent on air purifier. Recently, he has also developed a project on Smart City garbage transportation system for which he has already applied for a patent. The technology has already been transferred to M/s Digitech Controls and Systems of Pune for mass production. Dr Nagla claims that the invention will be a necessary part of a smart city to carry the garbage buckets from houses to garbage dumps, several kilometres away. As compared to the conventional conveyor belt transportation systems of industry, the robotic modular system will be low in cost, reliable and modular in nature. The intelligent system will be connected to the computers and mobile phones using IoT technology.

Having already got published 88 patents and got seven granted, Dr Lovi Raj Gupta, Executive Dean of Science and Technology, Lovely Professional University, along with a team of scientists have developed 20Sec4Life. It is an IoT device to time hand washing. It glows, beeps and plays a musical tone for 20 to ensure people disinfect their hands properly. It can be mounted on any liquid soap dispenser to ensure the user washes their hands properly as per the WHO guidelines for Covid. The splash-proof device operates via the battery. The base device gets triggered and starts playing music for 20+ seconds when the nozzle of the handwash is pressed to dispense soap. The expected selling price of the base model post commercialisation is Rs 70 per unit. Dr Gupta said an Australian patent for the item had already been granted for the product. Another useful Covid-related product for which Dr Gupta and his team have been granted a patent is ‘Ally’ which is a ‘smartbin for Covid wards’. “Ally’s task is to collect waste in quarantined areas without human contact and hence it can save lives of thousands of frontline workers battling the Covid-19 pandemic. It can even work in 100-bed hospitals and can be pre-programmed so that it can be directed to a particular bed number. It can even be used to dispense medicines and meals to the patients. We are hopeful it will be commercialised soon,” he shared.

The most significant patented technology of ICAR — Central Potato Research Station is aeroponics technology. Team for this technology of growing plants in air was led by Sukhwinder Singh. This technique has been licensed to 21 entrepreneurs, who are producing about 15 million potato minitubers each year to meet India’s demand of pre-basic seed potatoes. He has also contributed to many other technologies, including Vegfast and Hydrofast, the technologies for urban rooftop vegetable gardening, specially designed hand tools for greater ergonomic ease, innovative tissue-cultured plant hardening technology, sensor-based grading/counting systems, insect proof net houses, and so on. He has filed/granted 18 patents in various disciplines of agriculture. Yogesh Gupta, assistant chief technical officer, with over 30 years of experience in post-harvest management of potatoes, has been working on natural organic sprout suppression in potatoes for the past 15 years and has identified several extremely promising sprout suppressants. In addition, he has filed/granted two patents on sprout suppressor and potato dehydration.

As a part of his PhD work at Lovely Professional University, Bhupinder Kapoor, a resident of Phagwara, has developed a prodrug of Sulfapyridine for treating rheumatoid arthritis. The new treatment, which was developed after to give a new lease of life to the arthritis drug Sulfapyridine for its anti-arthritic potential, has been published as an Indian patent while an international (Australian) patent has been granted. Despite being a very old drug, sulfapyridine is still used in treatment of rheumatoid arthritis. However, long-term use of the drug result in side-effects such as nausea/vomiting, rashes, dizziness, anxiety and abdominal pain. The prodrug exhibited better retention in liposomes as compared to the drug, thus reducing the symptoms of inflammation. The prodrug treatment is administered by injecting the affected area; and not through oral consumption. This means that the medication only remains in the affected area, without spreading to the rest of the body. The research team responsible for this new drug delivery method also includes Dr Monica Gulati and Dr Sachin K. Singh and Reena Gupta.

Avtar Singh Buttar has been granted a patent for inventing ‘A device and method to control headlights of vehicles as per behaviour of eye vision’. Explaining the concept, he said it worked on sensing the light of the vehicle coming on the opposite side by placing a sensing unit and controlling the light of the vehicle in such a way that it does not blind or pain the eyes of the driver due to excessive light. “I had such an experience during driving, which made me think of a solution to ward off the problem. The resultant beam on using the device is a mixing of lights of all bulbs/filaments of the main beam and the lower beam to be controlled distance-wise. The control of light occurs automatically with the adjustment of headlights distance-wise. Professor Buttar has also got published three other patents based on photodiode, phototransistor and another on computational prey chase techniques in animals.

Chemisorption of dyes from industrial effluent

Having worked in the Department of Chemistry at Hans Raj Mahila Maha Vidyalaya, Dr Ekta Khosla has got a patent published on ‘Surfactant modified eucalyptus bark as novel adsorbent for removing basic dyes’. Now working as Principal at DAV College Malout, she shares: “Dyes are contaminating water and we need to treat it so as to recycle it again. My research can help remove dyes from the industrial effluents and help conserve water and save the environment in a big way. I have developed this technology along with collaborators from SBP University, Vallabh Vidyanagar. We conducted the entire research at Eucalyptus Cloning Centre in Phillaur. It basically involves use of bark shed by the tree and the process used for the same is chemisorption.