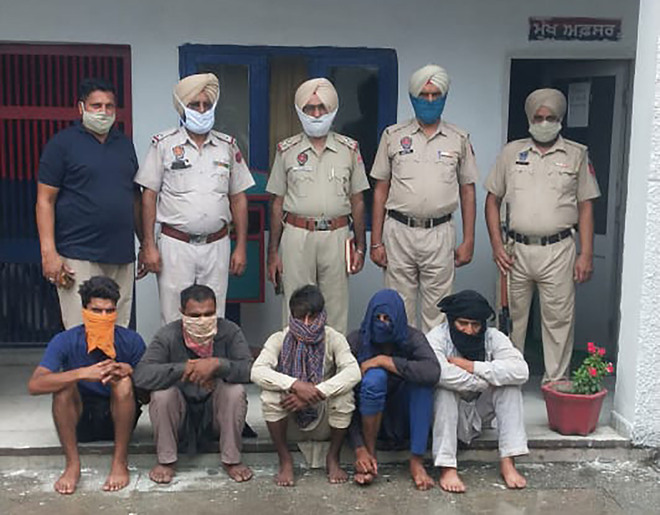 Five accused in the custody of Kapurthala police. Tribune photo

The police on Tuesday busted an inter-state gang of cattle thieves by arresting its five members and recovered eight stolen cattle. Besides a Mahindra Pick-up used for ferrying milk-yielding cattle was also recovered.

The accused have been identified as Mushtaq, Mohammad Sadiq, Hasaf Ali and Swar Deen all residents of Bardwal, Dhuri and Shokat Ali of Malsoora, Ludhiana. Senior Superintendent of Police Harkamalpreet Singh Khakh said Satinder Singh of Mirzapur Dhilwan village had complained that some unknown persons had stolen his cattle on the intervening night of July 16-17.

The SSP said during the investigation, the police teams got a tip off that some thieves who were involved in cattle thefts from Mirzapur were hiding in Dhuri of Sangrur. The police teams were immediately moved to the search the area disclosed by the source. The SSP said that there the police teams arrested five members of the gang and recovered eight cattle and a Mahindra Pick-up (PB-07-BD-6419) used for thefts from the spot.

During the preliminary interrogation, the accused confessed of committing thefts of cattle for a hefty sum of money by selling in the market. Khakh said the all accused were booked under Sections 457, 380-B of IPC registered in Dhilwan police station.