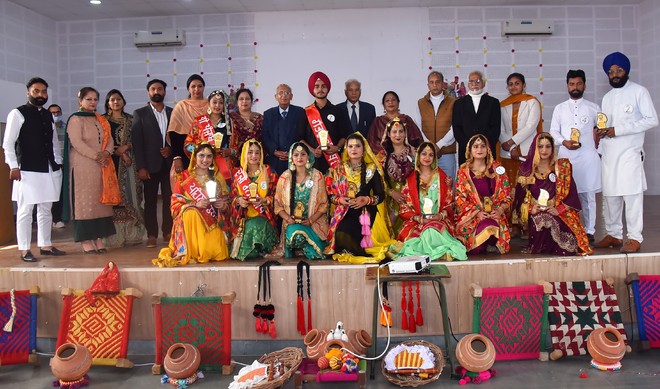 Prize winners during the International Mother Tongue Day celebrations at DAV College of Education in Hoshiarpur.

Jalandhar: The NSS unit of Innocent Hearts College of Education celebrated ‘International Mother Tongue Day’ with the objective to promote and preserve the richness and beauty of Punjabi language and culture. The concept, importance and history of Punjabi language was explained in detail by well-renowned teacher educator Dr Tirath Singh. In his online talk, he guided the student-teachers to protect, preserve and transmit their mother tongue to the coming generations in its pure form by not mixing it with the other languages. Online slogan writing and poster-making competitions were also organised. Through their artistic posters the student-teachers depicted their love and respect for their mother tongue. A plethora of slogan writings highlighted the significance and present day relevance of Punjabi language. Principal Dr Arjinder Singh congratulated the winners and appreciated all participants for their brilliant demonstrations. E- certificates were given to all participants.

Homage was paid to martyrs of Nankana Sahib massacre by the department of history, Lyallpur Khalsa College for Women, at Virasati Ghar of the college campus. Baba Sunder Singh was a martyr in the massacre and his sword was used bravely in the saka. It’s worth mentioning that his pious sword was gifted to Principal Dr Navjot by his family. The centenary of Sri Nankana Sahib massacre, which is popularly known as Saka Nankana Sahib is being marked by paying the tribute. Dr Maninder Arora, Head, department of history, enlightened staff and students about the history of the day as she said that Nankana Sahib is the birth place of the first Sikh Guru, Guru Nanak Dev, and was also the site of the first big agitation by the SGPC to take back control of gurdwaras from mahants backed by the British.

‘An idea can change your life’

The commerce club of Hans Raj Mahila Maha Vidyalaya organised, ‘Think Strategically – A Business Plan Competition’ with a tagline ‘An idea can change your life’. It was the first offline competition by the department post Covid-19, where students participated with full zeal. Binoo Gupta, in-charge Commerce Club, and in-charge Alumnae Association, Dr Seema Khanna, in-charge coaching in CA Foundation, Shefali Kashyap and Dr Jaspreet Kaur from the commerce department were a part of the organising team. The event was judged by Dr Kanwaldeep, officiating principal, head, department of commerce and management, Dean academics, and Meenu Kohli, co-dean Youth Welfare Committee. Binoo Gupta told three success stories of Bhavik Aggarwal-founder of Ola Cabs, BYJU’S –An online education platform, and of Phalguni Nayyar- founder of Nyka who all are aspiring entrepreneurs. Students presented their business plans. The first prize was won by Team Protection Electronic Network (PEN) headed by Nandika and Tarandeep, second prize- Book My Aunty by Vidhi and Lakshita, third prize by two teams- Braitters by Radhika and Namrata, and Trash It-Crash It by Jyot Sifat and Sonamdeep Kaur. All winners were given trophies and e- certificates. Principal Prof Dr Ajay Sareen congratulated the winners and the organisers of the event.

A Class VIII student of St Soldier Divine Public School, Rishav Sanghotra, has set a milestone by making his place in National Hockey Sub-Junior U-17 camp. School principal Gagandeep Singh and Coach Rajiv Bali said that Rishav is a student of Class VIII. He has done well in the trials conducted for selection of National Hockey Sub Junior U-17 team and got a place in the training camp. Student Rishav said that this camp is being organised in the Haryana, where he is getting hockey training for a month. Chairman Anil Chopra and vice-chairperson Sangeeta Chopra while congratulating Rishav and his parents, father Arundeep Sanghotra and mother Paramjit Kaur Sangotra, said that even before this, many students of St Soldier Group were selected for cricket and other sports in state and national level. They also inspired Rishav to move forward with such hard work and to brighten the name of the parents and the institute. TNS