Despite repeated plaints, the MC making no effort to solve their problem 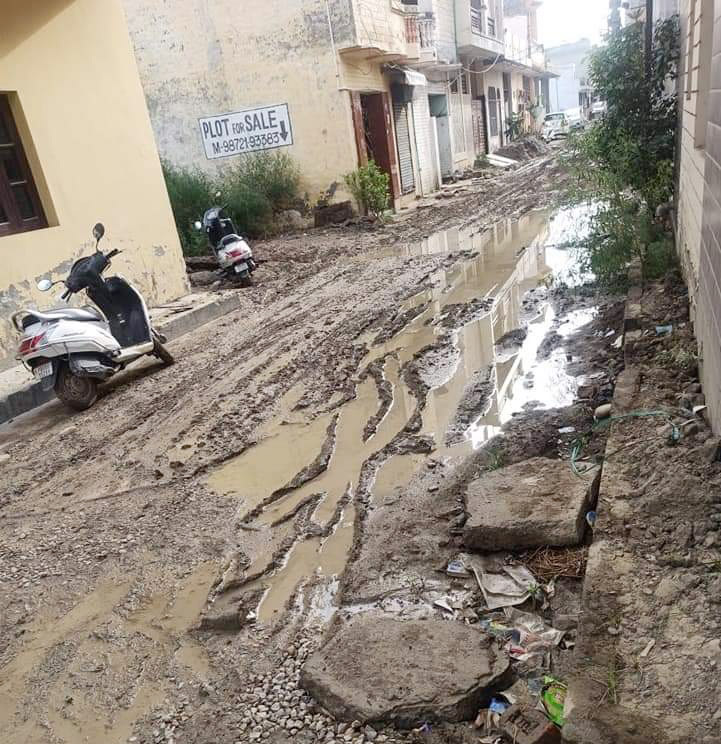 A road of Deep Nagar residential locality in Jalandhar Cantt.

Rendering severe inconvenience to residents and shopkeepers, the road leading to Deep Nagar and nearby villages is lying in a pitiable condition as it was more than a year ago. Despite repeated complaints regarding the poor condition of the road and problems being faced by the residents, no concrete efforts had been made by Municipal Corporation (MC) authorities to dispel the problem.

The residents said the road was already in bad shape and the recent rains have worsened its condition. They also pointed out that several minor and major accidents have taken place on this road due to its bad condition. “A few days ago, a man was injured after he lost balance of his two-wheeler due to a pit. Earlier, a school student was injured after his scooter got stuck in a pothole,” said Maninder, a local resident.

It is not just the main road, but the streets inside Deep Nagar are also in bad shape. There are more than 35 streets in locality. “Nearly 25 streets are lying in an utterly poor condition, besides in many of these streets, the sewerage work is also pending,” he alleged.

Surinder Minhas, former Sarpanch of the area, said: “Earlier when the development of these localities and villages was in the hands of panchayats, no work used to get delayed as the panchayat members were easily approachable. But since the villages falling under Cantt constituency and its nearby area have been included in MC limits, the residents are struggling for development,” he said.

He said the roads were already lying broken here when the work of laying sewer pipes started in April last year. “We all were hoping the problem of both poor roads and waterlogging would be solved, but little did we know, it was just the beginning of ever harder days ahead,” he said.

“All in all, the work carried out by MC authorities was totally unplanned. A majority of road projects started last year were just to make voters happy ahead of Assembly poll, and now when the government has changed, neither the politicians from the previous government are taking interest in getting them completed nor anyone from the present government,” he added.

Amardeep Singh, who owns a boutique in Deep Nagar, said: “The situation of our area road is no less than a hell. My worker’s hand recently got fractured after he slippedfrom his scooter on the road. I appeal to the MC authorities to repair the road at the earliest as both lives and business are being affected.”

Meanwhile, MC engineer Rajnish Dogra said he would only be able to comment on the problem after visiting the locality. When asked about delay in laying sewer pipes and why the streets have been left dug-up, he replied that he would check with his team why the work was delayed. He also added that there were chances that the estimate of repairing this road hasn’t been passed yet, therefore, the work is pending.