Collects straw from Mehatpur farmers to run his unit 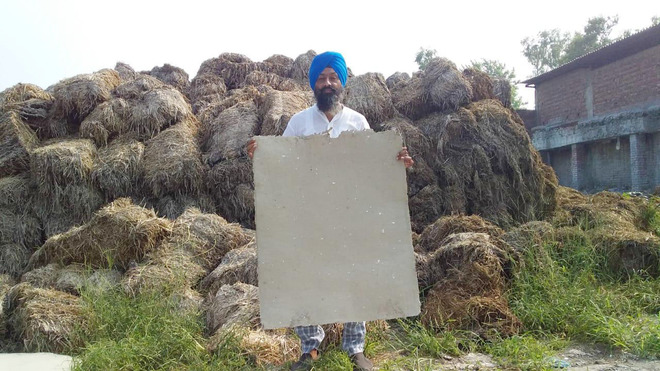 With the state government reiterating and urging farmers not to burn stubble, a farmer from Mehatpur village has set an example by using paddy stubble for making cardboard since 2010. The use of paddy straw as a raw material in the making of cardboard not only gives it a better quality, but production cost is also low.

Gurtej Singh, along with his two cousins Biranmol Singh and Paramvir Singh, started a small cardboard business in 2007. The unit is running at Kakran Kalan in the Shahkot block. For three years, they used only sack bags and sludge as raw materials in the production. It was in 2010 when he started using paddy straw and found that his input cost was reduced. “Sludge and sack bags are costly. Now, 70 per cent of paddy straw is used, resulting in a low expenditure for a decade,” he says.

Gurtej says he came in contact with Krishi Vigyan Kendra (KVK), Nurmahal, before 2010, and it was after getting training there and under the guidance of experts he started working on using stubble in cardboard manufacturing.

He gathers paddy stubble from 300 acres in Kakran Kalan and surrounding villages. Kakran Kalan Sarpanch Paramjit Kaur claims that no one in the village burns stubble. Corroborating Gurtej’s statement, she says almost every farmer in the village provides paddy straw to the unit.

While explaining the procedure, Gurtej informs that with the help of a Baler machine, several bundles of paddy stubble are made. Then the stubble, sack and waste products’ sludge is put in a Beeter machine that mixes up the three raw materials, and a paste is formed, which gets transformed into cardboard.

“It gives me satisfaction that I am not contributing to the pollution. I am using paddy stubble in a right way,” he adds.