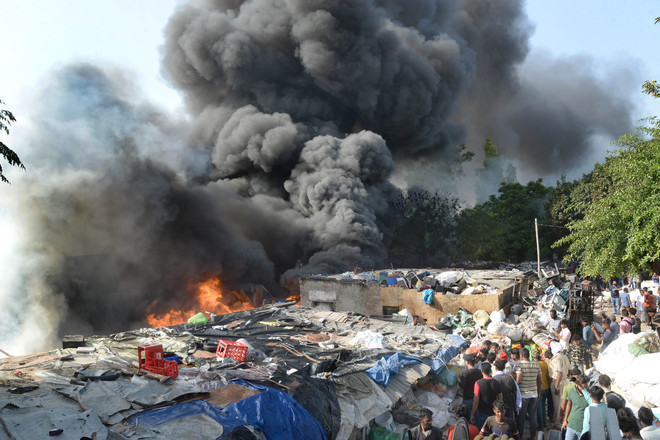 Massive fire that broke out at a slum near PPR Mall in Jalandhar on Monday. The fire was initially reported at a junk warehouse near Urban Estate, Phase 1, which slowly spread to a nearby slum area. Photo: Sarabjit Singh

A massive fire, which broke at a scrap godown, reduced an entire slum area near PPR Mall into ashes here this afternoon. The incident was reported at around 2.30pm, following which fire tenders, policemen and MC officials rushed to the spot.

The fire was initially reported at a junk warehouse in Jyoti Nagar, near Urban Estate Phase-1, which slowly spread to the nearby slums. As a result, 50-60 shanties were destroyed in the fire. Fire Brigade vehicles reached the spot as soon as the incident was reported. However, a delay of 45 minutes in bringing the water containers caused the fire to rapidly spread to nearby areas.

Since the godown was situated in a slum area, the incident caused panic among people living there. Eyewitnesses said around two LPG cylinders exploded in the area after catching the fire. As fire tenders did not reach the spot on time, it took hours for the officials to bring the fire under control.

This is the second such incident reported this year in which slums were gutted in the fire. The first one was reported in March near the Maqsudan bypass slums. Moreover, a similar incident was reported near the Rail Coach Factory, Kapurthala, in June this year.

Residents: No action despite complaints

Members of the Rishi Nagar Residents’ Welfare Association said they had been bringing the matter of piling up of inflammable substances by jhuggi residents for a long time. Gajinder Singh Jaura, president of the association, said: “We have been lodging complaints with the DC and PPCB officials of Jalandhar for the past over three years warning them of a likely mishap, but to no avail.”