Jalandhar in the grip of viral fever 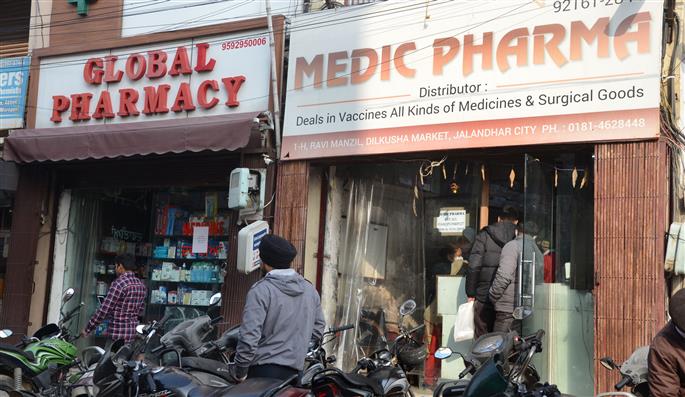 Given the change in the weather conditions and rise in Covid-19 cases, the city is in the grip of viral fever. The sale of antibiotics, anti-allergy medicines, cough syrups, paracetamol and other fever drugs have also risen by 50 per cent.

The Tribune talked to a few medical specialists and traders at wholesale and retail medicine markets in the town, who admitted that a majority of the patients were suffering from viral fever and that the sale of medicines had gone up after the third week of December, respectively.

Sale of immunity boosters also up

A local chemist, who requested not to be named, said sales of cough syrups, fever medicines like paracetamol and other antibiotics like Azithromycin, Doxycycline and others, have witnessed an unprecedented rise in the last 15days. “After every five minutes, there’s a patient or someone from the family visiting and asking for medicines by telling symptoms which are more or less of a viral fever,” he said.

Similarly, another chemist, Mohit Kumar, near Maqsudan, said: “The sale of viral medicines has gone up by over 50%. Even masks and sanitisers too are back in demand”.

Vinod Madan, a wholesale medicines dealer, said: “The demand has gone up by 15 to 20 per cent as the traders in retail business had placed new orders of fever-related medicines and among other anti-allergic drugs”.

Health experts also said that almost every third family is suffering from the fever or cold, but fearing that they will be tested Covid positive, they are not visiting the doctors. When asked whether these viral infections could be Covid, Dr Inderdeep Singh of Shamsher Hospital, said: “Nothing can be said without conducting the tests since symptoms of the illnesses can overlap.”

He said cough, fever, tiredness and muscle aches are common to both the flu and Covid-19, therefore, the persons are suggested to self-isolate and monitor their own health. In case symptoms persist or get worse, they should definitely get themselves tested.

Dr Navjot Dahiya, national vice-president of the Indian Medical Association (IMA), said there was an increase in viral infections these days due to weather change but people should not take it lightly. “The cases of Covid-19 are also rising; therefore, even if one is suffering from a normal cold or fever, they should use a mask and maintain hygiene. They should wash hands often and maintain a nutritious diet while drinking enough amount of water,” he said.

He further said that the chemists in the city must not sell fever drugs and other anti-allergy drugs without the doctor’s prescription. He asked people to visit doctors and get themselves checked before taking any medicines. “The only way to defeat this pandemic and other infection is by taking precautions,” he added.