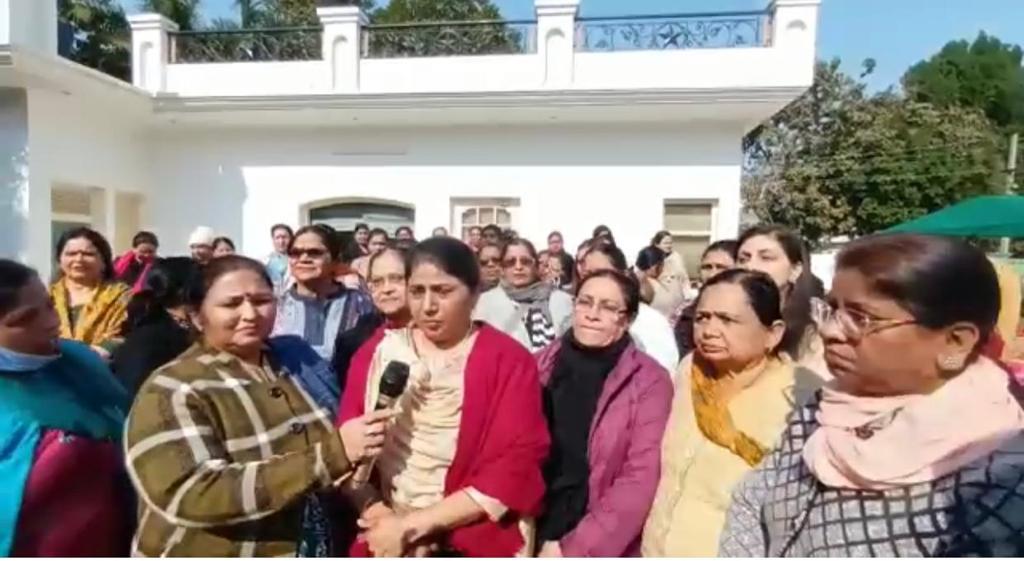 Members of the Punjab Mahila Congress at the residence of state president Balvir Rani Sodhi in Phagwara.

Members of the women wing of the Congress are annoyed with the party. Not just the district women chiefs, but also Punjab Mahila Congress president Balvir Rani Sodhi. None of the 12 women office-bearers, including Sodhi, who had sought ticket from the party to contest the forthcoming elections, have managed to get one. They all gathered at her place in Phagwara on Friday to vent out their ire.

The Mahila Congress office-bearers were so angry that they even decided to hold a protest on the Phagwara highway against their own party but Sodhi said this in any case would not help them at this stage and also damage the prospects of the party. They all have been using social media to express their reactions over the ticket denial.

Sodhi said: “It has been an unfair deal with us. Only 11 women candidates have been picked from among the total candidates announced so far. None of these include anyone from within the Mahila Congress. We are the ones who at a short notice are told to gather members and reach all protest sites, perform effigy burning and ensure a good crowd at rallies. But our work never gets recognised and this time it has been a completely raw deal.”

She further added: “The youth wing of the party surely gets adjusted. Ludhiana MP Ravneet Bittu, Phillaur candidate Vikramjit Chaudhary, Garhshankar candidate Amarpreet Lally and Ropar canddiate Brinder Dhillon are all ex-youth Congress presidents. If youth are adjusted so well, why can’t the members of the women wing get the same treatment?”

Jasleen Sethi, Jalandhar councillor and district president of the Mahila Congress who had been claiming ticket from Jalandhar Central, too, has shown regret. “We have ignored our occupations and household works for years to reach the level of the district president. We all reached this place so that the party could recognise our efforts and give us ticket. If not all, the party should have picked at least a few more deserving candidates,” she said.

Perpreet Brar, another woman activist from Jalandhar, also has gone on social media to share: “When I sought ticket first in 2017, I was ignored. I felt that there must be something lacking in me. I worked with more dedication but to see this day again.”